When added to a basal methionine deficient diet and at the same equimolar level, three main sources of methionine all lead to the same growth performances of broilers. This was shown in some recent trials.

Methionine is an essential amino acid for animals, because it cannot be produced by the animal itself. This amino acid is vital for animal health and is needed for many functions in the animal’s body. There are three different methionine sources available in the animal feed industry: DL-Methionine, L-Methionine and DL-HMTBA. DL-HMTBA and DL Methionine are absorbed, metabolised, converted and used to provide L-Methionine to animals. Due to their respective chemical composition, DL-HMTBA and DL-Methionine are leading to different mechanisms of absorption, metabolism and conversion to L-Methionine and as consequence variable benefits for animals beyond performance. The powder methionine (DL-Methionine, L-Methionine) represents 60% of the market consumption and is the preferred form of pre-mixers, milk-replacers producers, etc. Liquid methionine (DL-HMTBA) is used at 40% and mostly by integrators and feed millers.

In this study, these 3 sources were compared. The trials were commissioned by Adisseo and done at CERN (Center of Expertise and Research in Nutrition, France). 2 trials were performed to compare the effect of methionine sources on broilers growth performance. In the first trial, the authors compared DL-Methionine and L-Methionine on Ross PM3 male chickens reared from 1 to 36 days, fed with 7 diets: a deficient basal corn/soybean meal based diet without extra methionine addition (0.30%, 0.28% and 0.26% of digestible methionine in diets, respectively for 0-10 d, 11-24 d and 25-36 d periods) and 6 treatments supplemented with three graded levels of either DL-Methionine or L-Methionine. Performance criteria were calculated for each rearing period: feed intake, body weight gain and feed conversion ratio (FCR). Methionine efficacy was calculated as the intake of extra methionine needed to produce 1 g of extra body weight gain (as described by Agostini et al. 2015).

In the second trial, L-Methionine and DL-HMTBA were compared in the same conditions as in the previous trial. The composition of the basal diet was the same for the 2 trials. DL-HMTBA was provided in the feed assuming 100% bioavailability. The authors demonstrate that L-Methionine and DL-HMTBA were also equivalent to sustain broiler performances at each of the three doses tested. For instance, at the requirement in TSAA (same added methionine than in the previous trial), the methionine efficacy was 14.27 ± 0.23 mg of methionine per g of extra gain for DL-HMTBA diet, which is not significantly different from 13.94 ± 0.15 mg of methionine per gram of extra gain for the L-Methionine diet. 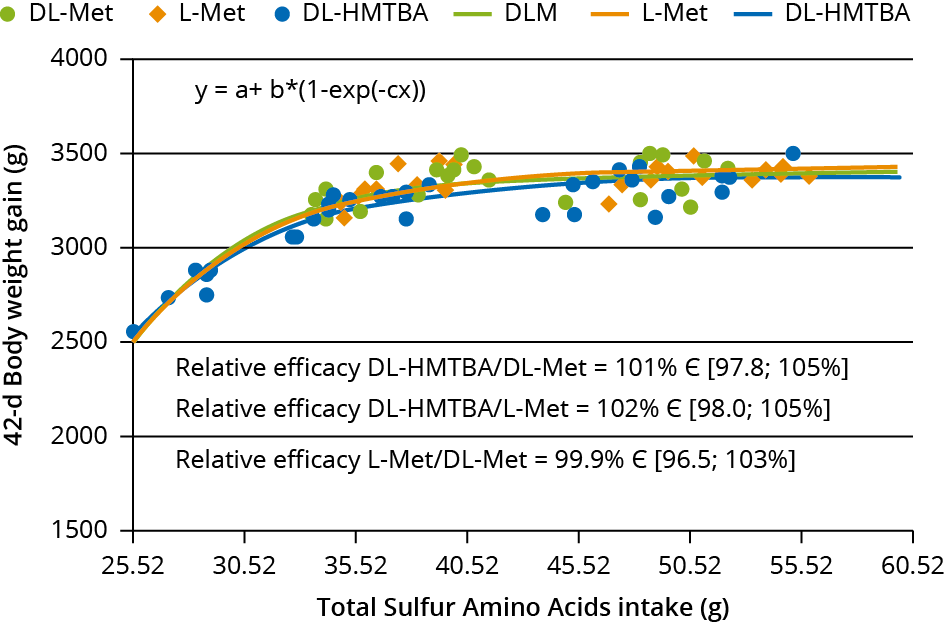 Thereafter, the third trial confirmed the equivalency of these 3 forms of methionine and their similar efficacy. 1,050 Ross PM3 males chickens reared from 0 to 42 days received a 3 phases feeding programme (0-14 d, 15-28 d and 29-42 d). Diets were supplemented with one of the 3 sources of methionine at graded levels compared to a basal diet deficient in methionine. DL-HMTBA was added in the feed assuming 100% bioavailability. In accordance with the 2 previous trials, the results prove that the efficacy of L-Methionine, DL-Methionine and DL-HMTBA is similar when supplemented on molar basis. From 0 to 42 days, no significant difference was observed between these 3 sources of methionine on feed intake, body weight gain, feed conversion rate and methionine efficacy. These results were presented in the XXVth World Poultry Congress Beijing, 5-9th September 2016. The 3 trials also confirmed that methionine addition improves growth performance in comparison to the basal deficient diet. Exponential models with separate plateaus were then fitted to each methionine source for body weight gain as response to Total Sulfur Amino Acids intake. Body weight gain and feed conversion rate are improved, as Total Sulfur Amino Acids level increases with each of the methionine form, until a plateau is reached (Figure 1). Consequently, these 3 studies showed the equivalence between DL-Methionine, L-Methionine and DL-HMTBA to promote broilers’ performance, when supplemented on a right equimolar basis.

References are available on request.