Phytogenics for efficiency in broilers

Phytogenics – to get the most out of feed

The incredible biodiversity of the plant kingdom provides a large variety of different herbs and spices with an enormous number of active substances that exert different effects in the organism, which range from stimulating endogenous enzyme secretion over influencing gut microbiota to enhancing gut protection. Their mode of action depends on the chemical structure of the active substances or constituents. Spices, herbs, essential oils or extracts exert different effects. For example, phenols such as thymol, carvacrol and eugenol (often derived from thyme, oregano and clove) and their methyl ethers have a very strong antiseptic and antimicrobial effect. Species of the families of Apiaceae, such as caraway and fennel, and Lamiaceae (e.g. rosemary and peppermint) have strong anti-oxidative properties. Other plant compounds support better digestibility by boosting digestive secretions such as bile, mucus and saliva, as well as enhancing enzyme activity. Yet constant and reliable results in animals can only be achieved with a well-defined formulation of a phytogenic blend, including standardised raw materials and effective quality control. 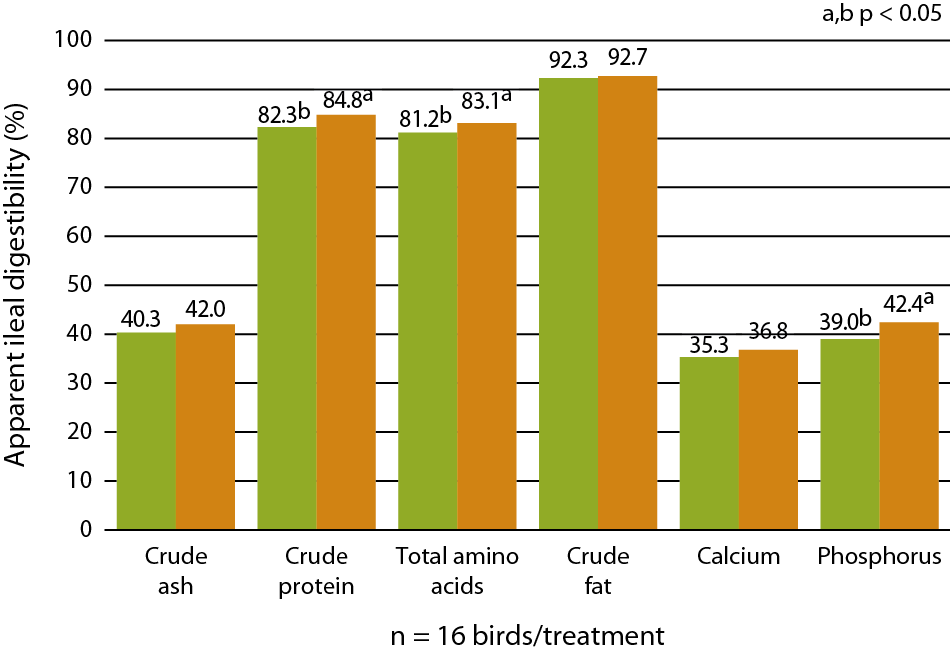 Gut morphology, gut protection and digestibility are interrelated and share the same target: optimising feed consumption, minimising losses due to poor digestion or intestinal disorders and maximising performance. Recent scientific research conducted at the Free University of Berlin found an innovative phytogenic feed additive* to be effective in improving nutrient digestibility and performance.

In two experiments, improvements were seen in the apparent ileal digestibility of dry matter, crude ash, crude fat and cal-cium. The phytogenic feed additive delivered statistically  significant improvements in the apparent ileal absorption of phosphorus, as well as the total apparent ileal digestibility of protein and amino acid (p<0.05;>Figure 1). A deeper look into single amino acid digestibility revealed statistically significant results (Figure 2). Of particular interest are differences in the first limiting amino acids in broilers. Improved digestibility not only affects poor digestion and resultant intestinal disorder, it is also of interest due to increased performance and a positive economic result.</0.05;>

Digestibility: the prerequisite for performance

In another experiment, performance parameters were evaluated at the Free University of Berlin. In terms of performance parameters, Hafeez et al. 2015 showed that live weight was improved by 2.5% and feed efficiency was improved by 1.9% when applying the phytogenic feed additive for 42 days (Table 1). Increases in performance parameters are even more remarkable when considering the fact that control birds outperformed the Cobb 500 standards at 42 days of age for live weight, feed intake and feed efficiency (Table 1). The positive trial results produced an economic benefit with a net return on investment of 3.4:1.

Gut morphology: an influencer of digestibility

Improvements in the digestibility of nutrients can be attributed to various factors in the gastrointestinal tract. Contributing elements are enhanced endogenous secretion and improved gut morphology. The latter is determined by the depth and length of crypt and villi in the gut. An experiment carried out at a research facility in France confirmed the positive effects of the phytogenic feed additive on intestinal enzyme activity. In this study, enzymes involved in sucrose, disaccharide maltose and amino acid breakdown showed increased activity (+26.2 to 27.5%) in broilers compared with control birds. Higher enzyme activity correlates positively with a greater digestibility of nutrients. Furthermore, a study at Purdue University demonstrated the additive’s positive effects on birds’ intestinal morphology. Here, Reisinger et al. (2011) concluded with an increase of villi length by 11.9% in challenged birds receiving the phytogenic feed additive compared with challenged control birds. Increased villi length is positively reflected in more differentiated cells and an increased capacity for nutrient absorption. 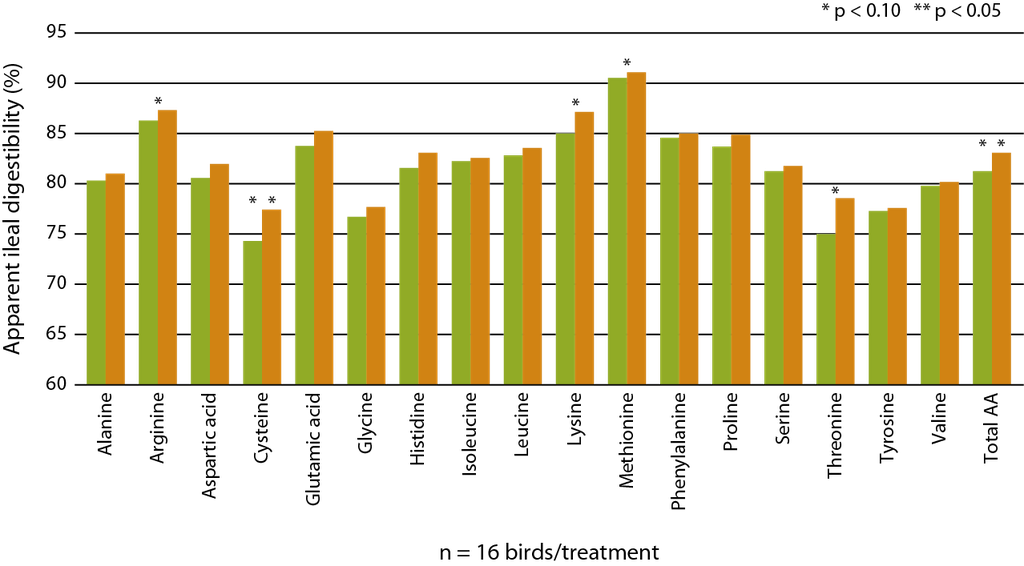 Other decisive criteria for gut health are inflammation and the antioxidant status of the animal. Inflammation leads to decreased gut protection in the intestinal tract and results from infections or feed-dependent changes. Inflammation is a costly process since it often involves significantly reduced feed intake and spends energy (the body’s natural response to counter inflammatory processes). These processes, together with a decreased antioxidant status, are related to lower performance (growth rates, laying performance, etc.) and are associated with higher morbidity and mortality. The anti-inflammatory effects of phytogenic compounds were examined in a number of studies. The direct anti-inflammatory activity of the phytogenic feed additive was shown in a test model with inflammation-induced intestinal cells at the Justus-Liebig-University in Giessen, Germany. Results demonstrated that the selected
phytogenic additive decreased the inflammatory response and supported the protection of intestinal tissue by exerting anti-oxidant activities.

Solutions to improve efficiency in poultry production rely on good gut performance in the animal. Impaired feed conversion resulting from poor digestion and intestinal imbalances leads to a cascade of problems, resulting in decreased performance. The significant influence of a precisely formulated phytogenic feed additive on gut performance via increased enzyme secretion, improved gut protection and positively influenced gut morphology contributes to an improvement in digestibility. Digestibility improvement with the selected phytogenic feed additive was confirmed in this instance in a cooperation with the Free University of Berlin. Scientific findings of enhanced digestibility reveal the direct correlation between improved feed efficiency and performance in animals. Both benefits are linked to greater economic success for producers.