The effects of various sources of selenium were tested on their effect on egg freshness and apparent bioavailability of selenium. This was done by measuring selenium levels in the muscle and the different components of the egg (whole egg, albumen, yolk).

In a study, performed by Lallemand Animal Nutrition, 96 ISA Brown laying hens were divided into four groups each receiving the same feed supplemented with 0.2 ppm of selenium in the form of sodium selenite (SS), selenized yeast* or two forms of synthetic selenomethionine (SM1 and SM2). Selenium levels were measured in the muscle on D55 and in the whole egg, albumen and yolk on D34. The Haugh unit score, a measure of egg freshness, was obtained in eggs sampled on D55 and stored for 10 days at 24°C. The sodium selenite (SS) batch was used as a positive control.

Effect on Se levels in muscle

Figure 3 – Transfer rates of Se on D34 in whole egg, albumen and yolk. 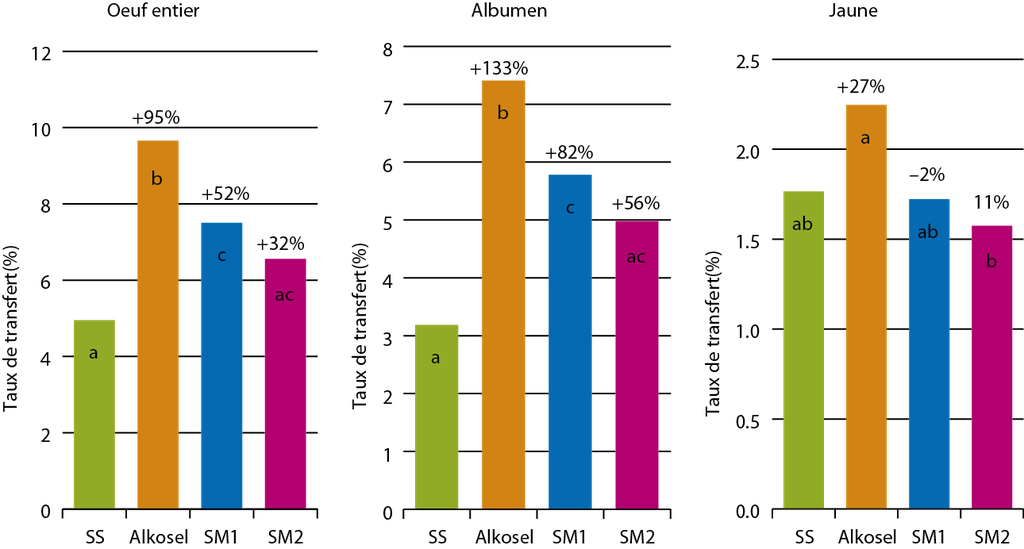 In laying hens: a better uptake and deposition of selenium, higher transfer rate

Laying hens were used here as a model to assess the effectiveness of different sources of selenium available on the market. The greater effectiveness of selenized yeast is demonstrated here by: a better uptake and deposition of selenium in muscle, a higher transfer rate into the different components of the egg and an improvement in egg preservation ability. The selenized yeast product tested here reflects a greater bioavailability of the forms of organic selenium contained in selenized yeast. This is explained partly by the presence of different forms of organic selenium (both SeMet and SeCys) in the product and by the fact that selenium metabolism involves other selenomolecules in addition to SeMet. Furthermore, this selenized yeast product is approved under EU legislation on additives and substances permitted for use in animal feed in organic farming.

Milk profit: It can always be better