Global aquaculture has grown tremendously. Unfortunately, it is primarily the shrimp industry that is facing major problems caused by bacterial diseases. Of greatest concern is Vibriosis. Plant extracts can help combat this disease.

During the warm season, mortality rates due to Vibriosis can reach 100%. This obviously means that the economic losses are devastating. Vibriosis is caused by gram-negative bacteria, which are members of the family Vibrionaceae. The main species in the genus Vibrio that occur in crustaceans are Vibrio alginolyticus, Vibrio anguillarum, Vibrio cholerae, Vibrio damsela, Vibrio harveyi, Vibrio mimicus and Vibrio parahaemolyticus. They are physiologically present in the sediment of waters and tanks.

Vibrio-related diseases generally occur in all stages of life, but are more common in hatcheries. Vibrios are found as normal flora in the hepatopancreas of healthy crustaceans. Bacterial loads can change depending on water temperature and in turn influence health status. For example, even though bacteria levels are low when water temperatures are cooler, crustaceans become more susceptible because they become less active. On the other hand, bacteria levels rise when water temperatures rise but since crustaceans prefer warmer water, they become more tolerant to the higher bacteria levels. However, if environmental conditions are compromised, bacteria can then turn into disease causing pathogens: overfeeding and overcrowding, which help create high levels of organic matter thus polluting the water, low levels of oxygen and under feeding. So there is a fine balance for maintaining homeostasis of life in these ponds.

There are different ways infection can occur:

• Orally
• Through wounds in the exoskeleton or pores that are made by chitinolytic bacteria (Vibrios are associated with shell disease)
• Through the gills, as they are covered by a thin cuticula, but a more common way is by penetration
• Through the midgut, as it is not lined by the exoskeleton
Several syndromes of vibriosis are possible: oral and enteric vibriosis, appendage and cuticular vibriosis, localised vibriosis (wounds, shell disease), systemic vibrosis and septic hepatopancreatitis. In praxis there are different names for vibriosis, depending on the characteristic symptoms – for example, tail necrosis, shell disease, red disease, loose shell syndrome (LSS) and white gut disease. These five types of disease were found in shrimp culture ponds in Andhra Pradesh (India). The three last mentioned cause mass mortalities. Another disease caused by Vibrio is the red leg disease, with red colouration of the  pleopods, pereopods and gills in juvenile and adult shrimp.

The so-called eye-ball necrosis is the result of an infection with Vibrio cholerae. The infected eye-balls swell, the cornea turns from black to brown, ulcerates and falls away. The animals die within a few days. The “seagull syndrome” or, as it is called in Latin America, the “síndroma de la gaviota” is a systemic vibriosis. The adult shrimp appear hypoxic, the body is reddened, gills are often brown in colour and feeding is reduced. They may swim lethargically at the edges and surfaces of the ponds, hence it is easy for the seagulls to “harvest” and eat them. Besides losses, the producers incur additional costs due to worse feed conversion, lower weight gain and lower market value due to the poor quality of the shrimp. To cope with this disease and to stem the losses, high amounts of antibiotics and chemicals are used. But this has consequences.

As antibiotics for shrimp are applied orally, together with the feed, not all of them reach their target. An estimated 15-40% of the antibiotics applied are not ingested. Also, some of the ingested antibiotics are not absorbed in the body and are excreted. All of these antibiotics remain in the water or sink to the bottom. The amount of antibiotics remaining in the watery environment or in the sediment varies from 1% (chloramphenicol) up to 90% (Oxytetracycline). It is estimated that 70-90% of antibiotics used in the therapy of farmed organisms end up in the environment and sediment and a high percentage exhibit antibacterial activity there. They disturb the extant community of the bacteria and affect microbial processes such as denitrification or primary production by cyanobacteria. The most worrying effect, however, is the development of antibiotic resistance. Due to multiple adaptations, some bacteria are able to resist an antibiotic treatment. As other, non-resistant and formerly competitive bacteria are killed by antibiotics, the resistant ones have all the chances they need to proliferate. But this is not the whole story. The responsible “genes for resistance” can be transferred to other bacteria, consequently allowing them to withstand antibiotic treatment as well.

Antibiotic residues in the meat can negatively influence the human intestinal flora and can lead to allergies or food poisoning. The development of resistance is also a tremendous problem for human medicine. As all these negative effects are increasingly occupying the minds of consumers, Europe and the United States have rejected a number of shrimp shipments over the last few years. As a result, shrimp produced for export are controlled very strictly for antibiotic residues and shrimp farmers are trying to reduce the use of antibiotics, especially during the last weeks before harvest.

There are increasing efforts to reduce the use of antibiotics by means of secondary plant compounds. Plants produce these substances to protect themselves from moulds, viruses and bacteria. Secondary plant compounds and their components are able to slow down or prevent the growth of these organisms. With regard to the high number of chemical compounds existing in secondary plant compounds, it is unlikely that the antimicrobial effect is caused by a single, specific mechanism. The exact molecular basis of the antibacterial action of SPCs needs further investigation but, based on in vitro trials, it is suggested that secondary plant compounds / essential oils can: disrupt the permeability of the bacterial cell membrane, disrupt the proton motive force, electron flow and active transport, coagulate cell contents, inhibit “quorum sensing” and prevent flagella development.

In pig and poultry production, secondary plant compounds have successfully been used for several years with the intention of improving feed conversion by supporting the intestinal flora and the immune system. The best clarified mode of action is the one found in thymol and carvacrol, the major components of the oils extracted from thyme and oregano. They are able to be incorporated into the bacterial membrane and to disrupt its integrity. This increases the permeability of the cell membrane for ions and other small molecules, such as ATP, leading to the decrease of the electrochemical gradient above the cell membrane and to the loss of the energy equivalents of the cell. In aquaculture, secondary plant compounds are a good tool for targeting bacterial challenges. In vitro trials show the high efficacy of carvacrol, thymol and trans-cinnamaldehyde against the gram-negative bacteria Salmonella typhimurium and E. coli, but also the high efficacy of the essential oils of oregano against five different species of vibrios. An in vivo trial with shrimp showed a reduction of vibrios in different tissues through the dietary essential oil of Mexican Oregano. 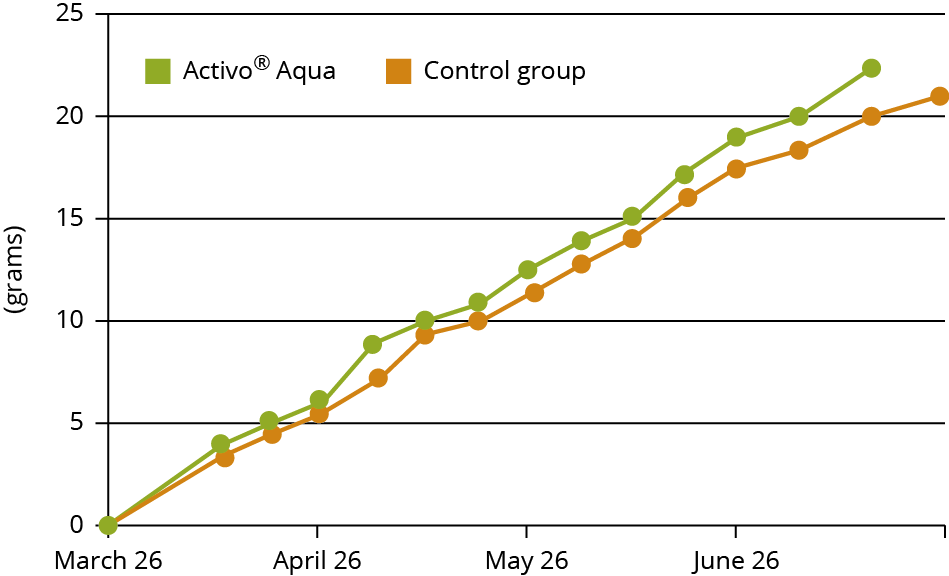 A scientific trial was conducted at Kasetsart University in Thailand. For this purpose, four groups (six replicates each) of White Leg Shrimp (L. vannamei) were housed in 100 L aquaria with ten animals each.  Control group: Standard feed without any additive;  AB-Group: Standard feed + 10ppm Enrofloxacin. Activo® Group 1: Standard feed + 100g Activo®/t of feed. Activo® Group 2: Standard feed + 200g Activo®/t of feed.  At the end of the feeding trial, the shrimp were stressed by high water temperature (33°C for 1 hour) and then challenged with Vibrio parahemolyticus (7.6 x 106 cfu/ml) by subcutaneous injection. Mortality was evaluated.
In this trial, the livability rate in the group fed Enroflaxacin was similar to the livability rate in the group fed 200g Activo®/t of feed. The specific growth rate of the AB group and the 200g/t Activo® group was higher than the control group. The animals receiving 100g Activo®/t ranged performance-wise between the control group and the antibiotic group. After the challenge with vibrios, the mortality in the control group was approximately twice as high as it was in the AB group and in the two Activo® groups. No difference could be seen between the two levels of dosage of Activo®.

To further boost the efficacy of Activo®, the idea was born to upgrade this already potent tool in shrimp cultivation by adding immune system stimulating mannan-oligosaccharides. This specific formulation (Activo® Aqua) has now also been successfully tested in the field with respect to performance parameters. The study was conducted on a shrimp farm of one of the biggest shrimp producers in Ecuador. Two ponds with 80,000 shrimp / ha were used. Feed was applied on a big plate. The control group (3 ha) received standard feed with min. 35% protein, min. 6% fat, max. 4% fibre, max. 13% ash. Trial duration: 123 days. The trial group (5 ha) was fed standard feed with 2 kg Activo® Aqua/t of feed on top. Trial duration: 112 days. Average shrimp weight was determined in constant intervals to monitor the growth rates of control and Activo® Aqua fed groups.

The group fed Activo® Aqua showed a consistently better development of body weight compared with the control group, resulting in a shorter cultivation period to harvesting and therefore a higher turnover of animals. With respect to feed conversion, the Activo® Aqua group also showed better results than the control group in every stage of growth.

Both trials present secondary plant compounds as a good alternative to antibiotic growth promoters. Especially in critical phases such as disease, they show their potential and decrease mortality rates. Under standard conditions, the better development of weight shortens the time to harvest and therefore increases the turnover of animals. A better feed conversion lowers feed costs and increases benefits. All in all, the improvement of performance parameters should be a good incentive to use secondary plant compounds in shrimp farming.

Ruminant feeding in the face of disease and parasites

Bacteriophage: The alternative solution to AGPs