Commercial poultry production is associated with various stressors that can lead to a decrease of productive and reproductive performance in growing chickens, parent birds and commercial layers. Selenium plays a key role in protecting the animals from the negative effects of stress.

In general, there are 4 major types of stress in the poultry industry: technological, environmental, nutritional and internal. A growing body of evidence indicates that most cellular-level stressors in poultry production are associated with oxidative stress due to excessive free radical production or inadequate antioxidant protection. Moreover, the rapid growth of the broilers supported by the enormous feed intake in growing birds leads to a further enhanced oxidative metabolism and thus production of reactive oxygen species (ROS). It is generally accepted that during evolution, living organisms developed specific antioxidant protective mechanisms to deal with ROS and reactive nitrogen species (RNS). Therefore, it is only the presence of natural antioxidants in living organisms that enable them to survive in an oxygen-rich environment. These mechanisms are described by the general term ‘antioxidant system’. In these systems (intra- or extracellular) in general, all participants have a role to play and are working in concert to build an effective defence system. Selenium (Se) plays a very important role as a ‘chief-executive’ of the antioxidant defence. Recently, the concept of cellular antioxidant defence has been revised, paying special attention to cell signalling.

It is generally accepted that in biological systems, Se participates in various physiological functions as an integral part of a range of selenoproteins. In chickens, 25 different SeCys-containing proteins have been identified. Of these, glutathione peroxidases (GSH-Px), Thioredoxin reductases (TrxR) as well as selenoprotein P are known to directly detoxify oxidants. Selenoprotein R (MsrB1) reduces free and protein-bound oxidised Met. Selenoproteins are indeed involved in glutathione-dependent hydroperoxide removal, reduction of thioredoxins, selenophosphate synthesis, activation and inactivation of thyroid hormones, thioredoxin-dependent repair of oxidised methionine residues and endoplasmic reticulum associated protein degradation. This explains the role of selenium in animal health, including roles in antioxidant defence, immune system regulation and other functions. Moreover, the selenoproteins are characterised by high tissue specificity, depends on Se availability, can be regulated by hormones and contributes to various pathological conditions if compromised (Surai, 2006).

As mentioned above, the main effects of Se in animals, including humans, are caused by specific SeCys-containing selenoproteins. In fact, SeCys is considered to be the 21st amino acid, and understanding selenoprotein synthesis has substantially helped with understanding the genetic code. Indeed, to the great surprise of many scientists, it was found that UGA serves as both a terminal codon and a SeCys codon. The dual role of the UGA codon confounds the identification of novel selenoprotein genes. The presence of SeCys in the catalytic site of selenium-dependent antioxidant enzymes enhances the kinetic properties and broadens the catalytic activity of antioxidant enzymes against biological oxidants when compared with sulphur-containing species. SeCys, is unique among proteinogenic amino acids in that it is the only one containing an essential dietary micronutrient (selenium) that requires complex tRNA-dependent synthetic machinery for its synthesis, delivery to the ribosome, and insertion into the nascent selenoprotein. In fact, selenium availability and stress are major factors that determine selenoprotein expression in various chicken tissues.

OH-SeMethionine: A pure source of Selenium

Mineral sources of Se have long been used in animal nutrition to cover Se requirements. Although selenate or selenite supply the minimun Se for enzyme synthesis, they cannot increase Se deposition in the tissues as SeMet. Conversely, organic Se sources have largely proven effective in enhancing SeMet deposition in various tissues as a reserve of Se that can be used when needed in response to oxidative stress. Se can only be present in animal tissues as SeMet, unspecifically deposited instead of methionine within proteins, or as SeCys, part of the selenoproteins. Any tissue is thus characterised by a level of SeMet or SeCys. For instance, while milk is rich in SeMet, the main form of Se in the blood is SeCys in dairies. In chickens and swine, SeMet is more important in deposition tissues, such as muscles, while more SeCys is present in metabolic tissues such as the liver, kidney and pancreas.

Pure sources of organic Se (L-SeMet, OH-SeMet) have shown that they are more effective than selenised yeasts or other so-called organic forms of Se in terms of increasing SeMet deposition in the tissues (Figure 1). 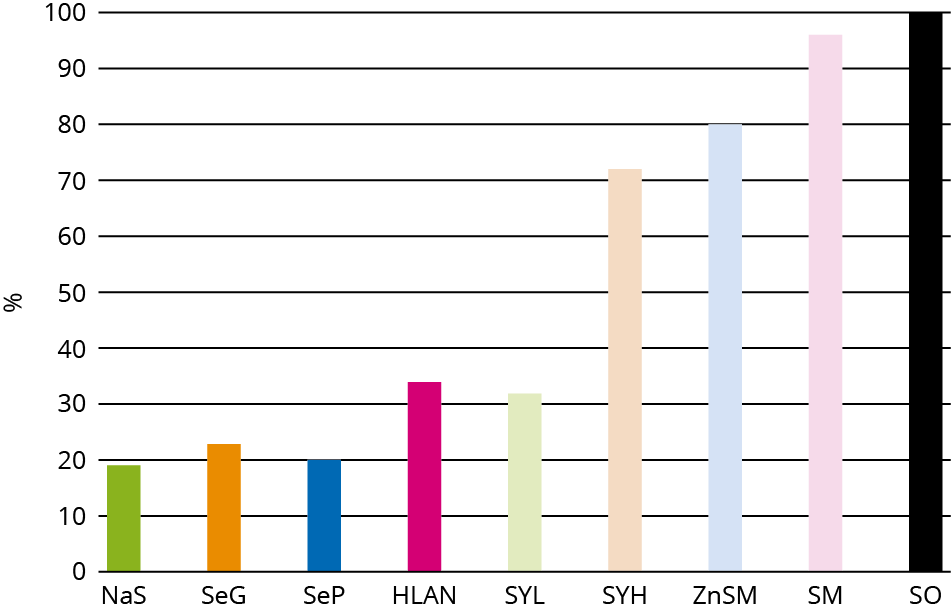 Even low doses of supplementation, like 0.2-0.3 ppm Se, show that both SeMet and OH-SeMet are equivalent to enhance Se deposition. However, the mobilisation of SeMet to release Se for SeCys de novo synthesis is not tissue or protein specific during oxidative stress and antioxidant demand. It is thus important to have enough selenoproteins in the important metabolic tissues to help the animal combat oxidative stress. OH-SeMet has proven superior to SeMet in that it increases SeCys synthesis and thus enriches tissues in selenoproteins, the functional form of Se for antioxidant purposes (Figure 2). It is indeed surprising to observe higher SeCys:SeMet ratios in various tissues in broilers, layers, swine and even dairies. 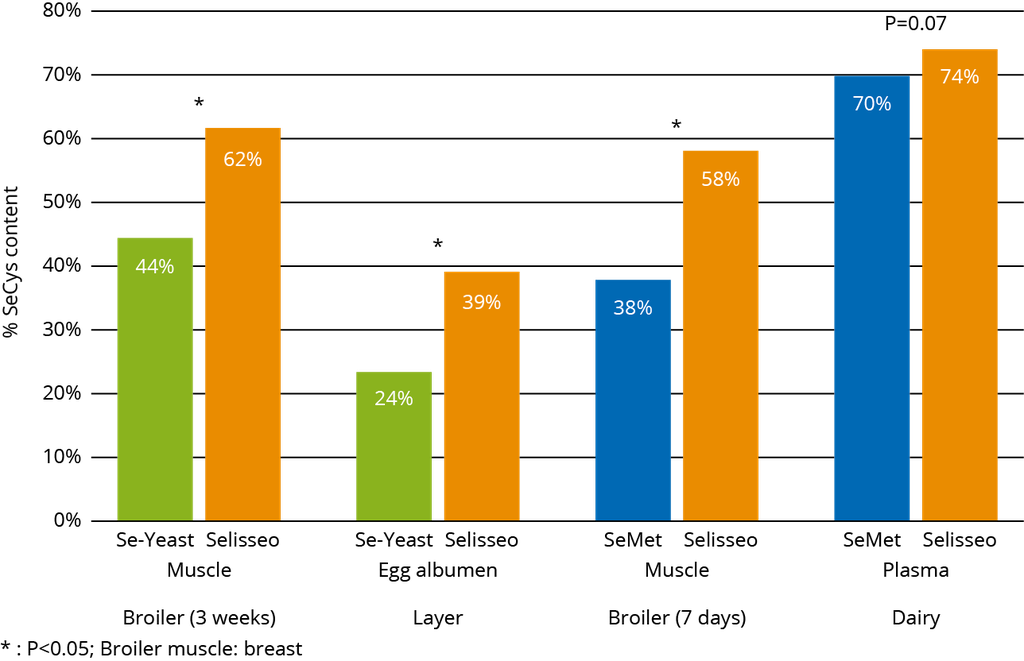 The rapid growth optimised by genetic progress has transformed our farm animals into athletes that are characterised by a high feed intake, a tremendous metabolic rate and protein deposition. This evolution has also reinforced exposure to free radicals (ROS and NOS) due to their high metabolic rate enhancing the need for antioxidant protection, which enables them to fully express their genetic potential. Moreover, the development of animal breeding in the southern hemisphere and hot countries, the exposure to more challenged feeds due to new raw materials, mycotoxins – enhance the need for antioxidant protection. It is therefore important to supply readily available sources of functional selenium.

4 factors to consider when including trace minerals in feed