A trial in Argentina has concluded that certain feeding programmes for breeder hens generate coloured and more resistant eggshells in addition to increased hatchability.

The trial was conducted in the Poultry Multiplication Center of ‘Corrientes’, which is an experimental station of INTA (National Institute of Agriculture and Livestock) located in El Sombrero city and supported by researchers from the Faculty of Veterinary Sciences of UNNE (National University of Northeast).

They studied 300 breeding hens belonging to a maternal population of slow-growing chickens called ‘T6’, a common genotype in that region. The hens were subdivided into a control group and an experimental group, with different diets assigned to each group. 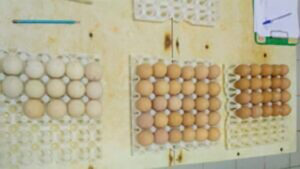 In total, the study collected 1,742 eggs, classifying each by colour into 3 categories:

According to the results, the colour distribution of eggs was not homogeneous in both treatments.

The test group presented a lower white eggs percentage. Meanwhile, a higher proportion of medium-coloured and brown eggs was seen in comparison to the group without treatment. There were no more details about the feeding programme.

“This suggests that more nutritive feeding during the rearing stage translates into improvements in the quality of the hatchable egg,” highlighted Aranzazú Grossi, researcher, and Fernando Revidatti, professor at UNNE’s Faculty of Veterinary Sciences.

ALSO INTERESTING: The effects of peanuts in layer hen diets
A study aimed to determine the effect of whole-in-shell peanuts and unblanched peanuts on the performance and production of laying hens, as well as on the quality, lipid and fatty acid content of the eggs produced. Read more…

They explained that previous studies on another hen’s genotypes indicated that coloured eggshells were positively correlated with some shell characteristics, such as resistance and hatchability.

The Department of Poultry Production of the Faculty of Veterinary Sciences has been working for years on basic and applied research related to the production of laying and breeding hens.

Those actions have been developed in coordination with producers, companies and other science institutions in the region. They hope this scientific knowledge about regional genotypes could contribute to productivity.

Anyhow, according to the researchers, there is inconclusive scientific evidence linking eggshell colour to hatchability in poultry farming. They agree that it is assumed that coloured eggs evolve favourably in incubation process with higher fertility and hatchability percentages than white eggs.

Role of nutrition in feather growth