During the summer of 2012, the US set more than 27,000 new heat-stress records for both daytime and night time temperatures, according to the National Weather Service. Record-high night time temperatures are especially dangerous because pigs experience continuous heat stress without any relief. “Unfortunately, the pig most likely to die from heat stress is the sow in late gestation — one of the most valuable animals in the herd,” Baumgard points out.  Losses attributed to heat stress during the reproductive cycle include an increase in returns to estrus, as well as decreases in the number of pigs born alive and in birth and weaning weights. On the production side, losses include a decreased rate of gain, inconsistent market weights, poor carcass quality due to increased fat deposition and soft seam fat, as well as loss of finishing pigs.

Heat stress is a result of temperature and humidity, commonly known as the temperature-humidity index, or heat-stress index, in swine. The thermo-neutral zone for pigs can range from 18°C to 24°C, depending on the animal’s size, physiological status, air movement and flooring type (Figure 1). Swine are susceptible to heat stress because they cannot cool themselves by sweating.  They carry a thick layer of adipose fat tissue, Baumgard explains, and have a high percentage of lean-muscle mass that contributes to increased basal-heat production.  In other words, the leaner the animal, the more susceptible the animal is to heat stress. “Every time a pig eats, its body temperature increases 1 degree just due to simple feed digestion,” Baumgard says. This effect — known as heat-increment feeding — is a complicating factor in heat stress. 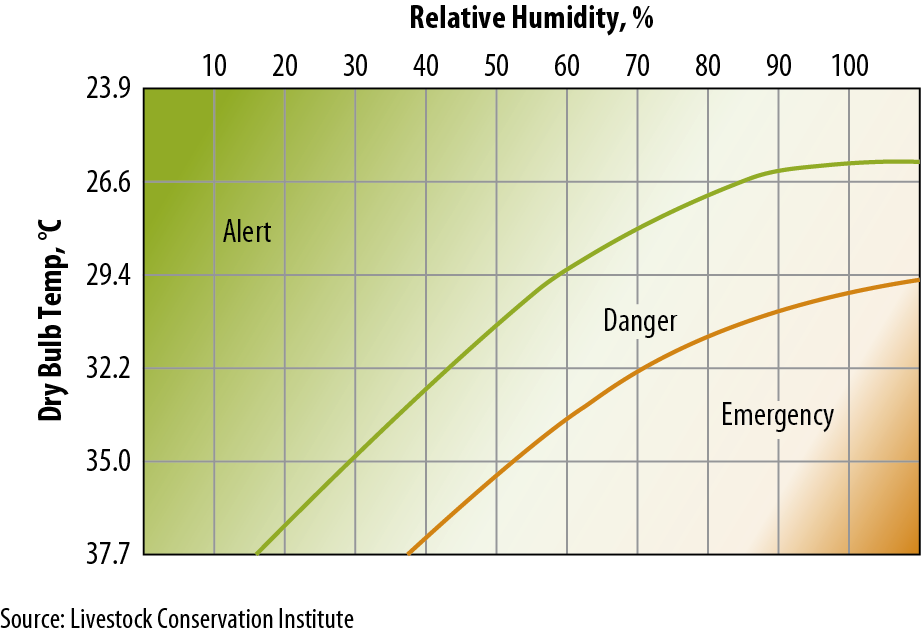 In an effort to cool themselves, pigs divert blood flow from the viscera to the skin. At the same time, blood vessels elsewhere in the body must vasoconstrict to maintain blood pressure. The prime target area for vasoconstriction is the gut. As the blood vessels in the gut vasoconstrict, they reduce the flow of oxygen to cells lining the gut. These cells are responsible for keeping toxins inside the gut and out of the bloodstream. “Enterocytes — the cells lining the GI tract — form the tight junctions that prevent lipopolysaccharides (LPS), other endotoxins and microbes from entering the body,” Baumgard explains. “As a result of the vasoconstriction, the cells lining the gut suffer from hypoxia and die; this allows toxins such as LPS to leak into the bloodstream and results in endotoxemia (Figure 2).” According to Baumgard, once toxins enter the bloodstream, the body mounts an inflammatory response that results in decreased appetite and increased body temperature due to fever compounded by the initial heat stress. Muscle breaks down, the animal becomes lethargic and productivity declines. On a physiological level, cells lining the gut increase their permeability — a phenomenon known as leaky gut. Heat stress also has a profound effect on metabolism. For instance, a decrease in feed intake — whether in pair-fed pigs or heat-stressed pigs — results in decreased bodyweight. However, heat-stressed pigs also show increased levels of insulin, which is the opposite of a pair-fed pig in a thermo-neutral environment. “We’ve known for more than 40 years that pigs finished during the summer months have a higher carcass fat content,” Baumgard says. “Heat-stressed pigs decrease their feed intake and produce a fatter carcass, while pigs fed a restricted diet in thermo-neutral conditions produce a leaner carcass. “These higher levels of insulin explain in large part why heat-stressed pigs deposit more adipose fat tissue and less lean muscle during periods of heat stress,” he says. “Clearly, heat stress affects the metabolism of the animal.” 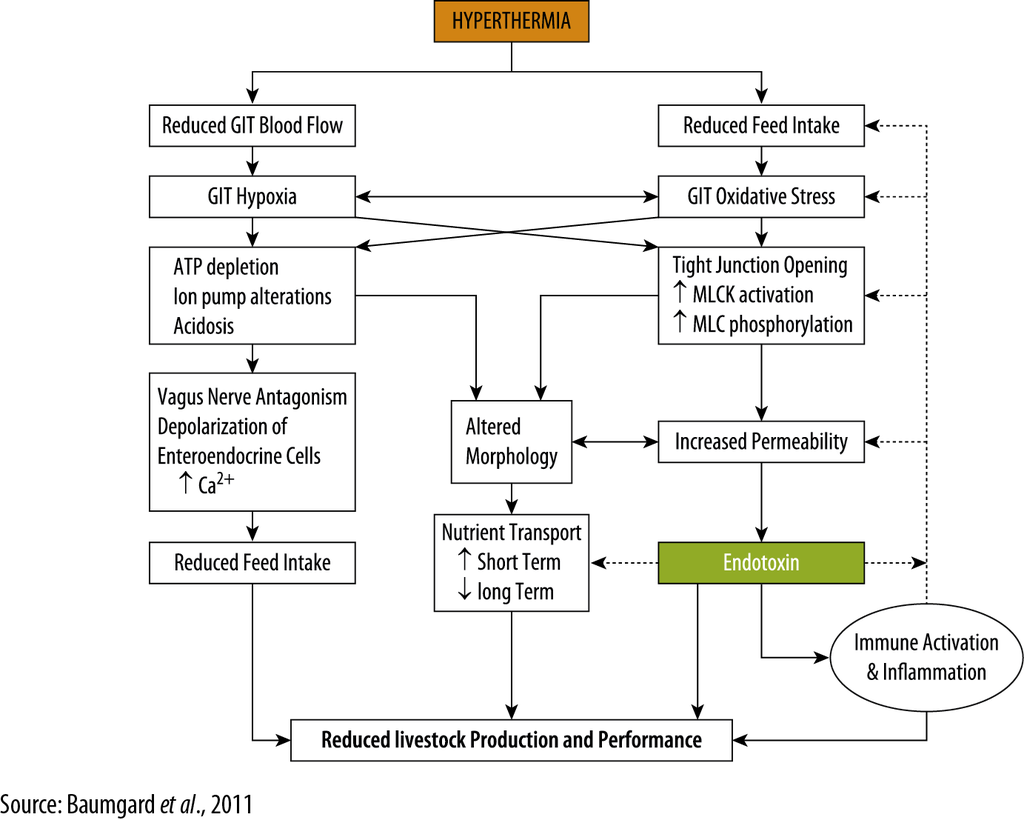 To better understand the effects of heat stress on the gut, Baumgard and colleagues (Drs. Nick Gabler and John Patience) conducted a study involving 48 pigs experiencing growing conditions of 34°C, typical of heat stress. Under these conditions, the researchers were able to show increased intestinal permeability based on the plasma LPS found in the bloodstream. Studies conducted in humans and mice have shown that zinc is essential for normal intestinal-barrier function and the regeneration of damaged gut epithelium (Alam et al., 1994). Research has also found that zinc acts primarily at the tight junction level to decrease intestinal permeability while maintaining intestinal integrity. Researchers conducted a follow-up study with 59 gilts to evaluate the effect of feeding varying levels of zinc for 28 days prior to exposure to both acute (24 hr) and chronic heat stress for 7 days. The gilts received varying levels of Availa®Zn and zinc sulphate before experiencing heat stress. Results show that the maximal benefit in transepithelial resistance — the permeability of the gut — was found in gilts fed zinc at 220 ppm. In a follow-up study, researchers looked at the importance of the zinc source. Thirty two crossbred gilts were fed either 120 ppm of zinc sulphate or 60 ppm of zinc sulphate plus 60 ppm zinc from Availa-Zn. The pigs received zinc for 17 days before they were subjected to 12 hours of heat-stress conditions. Following the 12-hour heat-stress period, pigs fed the combination of zinc sulphate and zinc from Availa-Zn had decreased rectal temperatures and an improvement in gut integrity. According to Baumgard, this research shows that feeding zinc from Availa-Zn improves intestinal integrity, that gut integrity during heat stress can be improved with zinc levels at 120 ppm and that the source of zinc is important. Feeding Availa-Zn represents a novel dietary tool and strategy that can be used to mitigate some of the negative effects of heat stress experienced by the swine industry. “Heat stress is now the greatest threat to efficient animal-protein production worldwide,” he stresses, “and for many countries the effects of heat stress, particularly in swine, threaten food security.”