Improved feed quality from the silo

Many factors affect feed quality and often there is quality loss in the silo. The feed does not always flow well out the silo and a combination of heat and moisture can even lead to decay. The Swedish company Mafa reinvented the silo to counteract these problems.

According to Giso Aalbertsen, owner of a broiler grand parent company in Maurik, the Netherlands, the Mafa silos do not lead to bacterial or fungal growth. He has been working with these silos since May 2015. “Conventional silos have the core flow concept. The new feed is released first, but underneath are older layers of feed and even more lower in the silo, a death zone is formed. The latter is a zone that is hardly released from the silo. And when this caked layer is released, it can substantially contaminate the rest of the feed with bacteria and fungi.” The only thing that helps with these traditional polyester silos is to properly clean them. But many poultry farmers do not do this. The risk of disease and production losses therefore increases.

Another problem that can occur in conventional silos is feed de-mixing. Due to the FIFO (first-in first-out) principle you get mass flow (Figure 1). Importer for Benelux John van Drunen explains: “The heavier feed particles sink the quickest, and the fine particles stay behind. The separation of these feed components is increasing as the feed drops in the silo.” Research from the German Landwirtschaftskammer NRW shows that silos with a core flow at the end of the emptying phase can have an increased share of powder (fine particles) of up to 25%.

The reason why there is always fresh feed coming from a Mafa silo is the result of mass flow (Figure 1). Van Drunen: “All the feed drops down evenly. And due to the aluminium-zinc alloy, the feed in the silo doesn’t heat up. “This is because the material has a strong light-reflecting effect. Scientific research shows that the heat transfer coefficient for galvanised steel is 120 W m2K and an aluminium-zinc alloy is set at 65 W m2K. Untreated, for example when not painted white, polyester has a higher U-value, compared to galvanised steel according to Van Drunen.

The Mafa silo has a so-called cyclone shape. Another remarkable feature is the rapid filling of the silo, due to only one slow filling pipe. The cyclone shape contributes to 30% more rapid filling, compared to other silos. “If the feed enters the cyclone, it rolls along the internal walls. The feed gains speed as it falls down the silo, which creates a mini tornado. This in turn makes sure that the air is released quicker through the ventilation holes on top of the silo. These air holes also release the heated air, coming from the feed. As a result, no condensation is formed, hence no bacterial and fungal growth” says Van Drunen.

Figure 1 – Fresh feed from the Mafa silo (right), due to first in, first out concept. On the left side, a conventional silo. 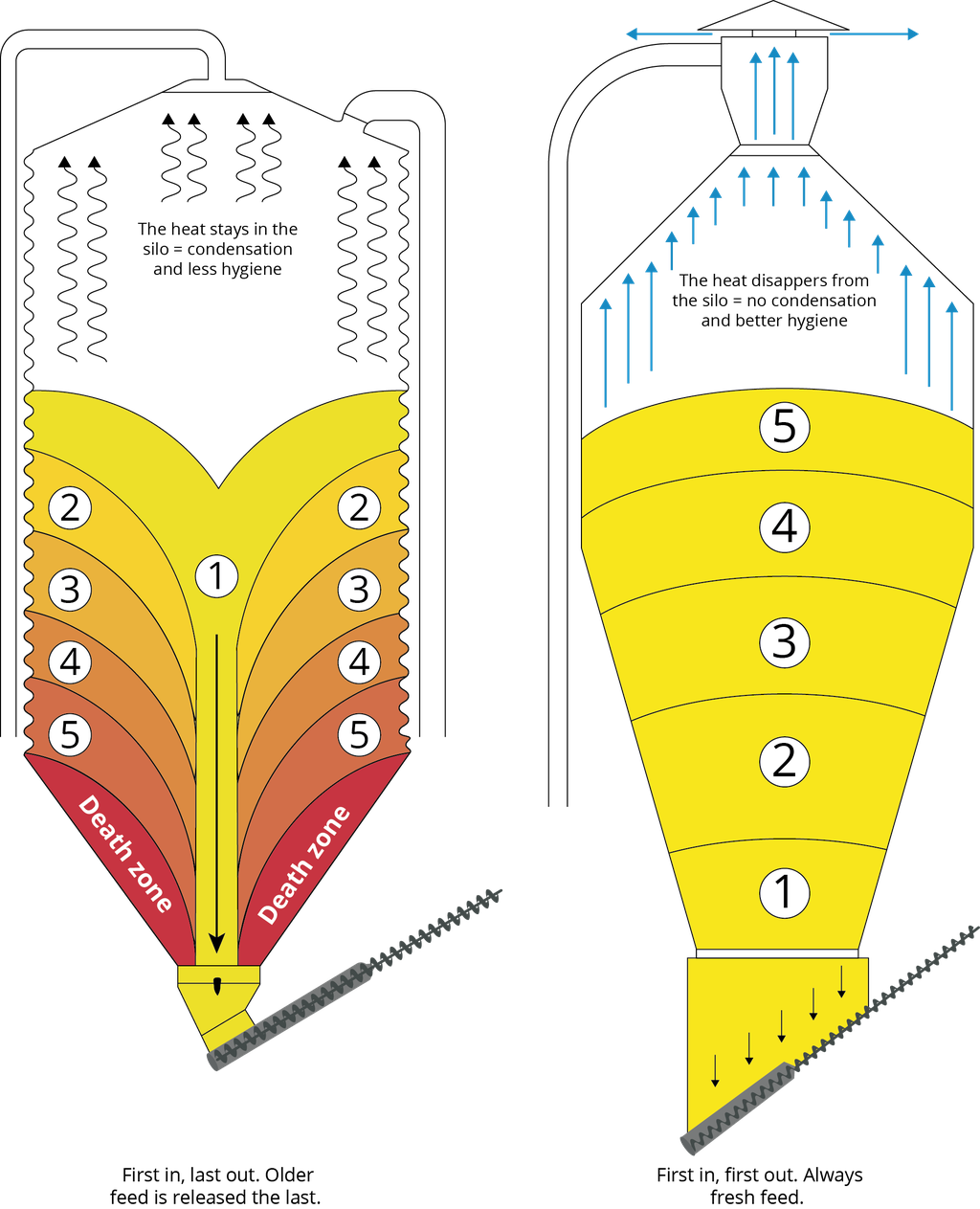 Also contributing to less feed de-mixing is the shape of the silo cone. The most common silos have a silo cone of 60 degrees. Mafa silos, however, have a cone of 75 degrees. In addition, the extension is 1.02 meters, compared to about 0.40 meters for most conventional silos. “Furthermore, the silo hopper stands at an angle of 37 degrees. In conventional silos a variety of degrees of angles can be seen. Furthermore, Mafa work with several alternative worm-screw-boxes with progressive intakes for smooth and homogeneous transport” Van Drunen adds.

The fact that the Swedish silo can be filled 30% faster than other silos has another benefit. This causes less feed de-mixing. “We have given presentations to feed manufacturers, who are very enthusiastic about the silo concept. Particularly of course with regards to the 30% faster filling capacity, Van Drunen says, “But also regarding the results seen in maintaining the feed quality.” Poultry farmer Aalbertsen believes that this concept can also reduce the feed costs. “The feed company can reduce the filling time with 15 minutes, which in theory can be straightened out in the total feed price. “In principle, there is no need to add a dust pipe to the Swedish silo, but Aalbertsen does have one. Reason for this is that he is required to take a dust sample, needed for Salmonella control. Besides the large Mafa silo, with a capacity of 43 tonnes, Aalbertsen has two small versions of the same design. “I use these for supplying additional feed to the parent stock. I used to use a small polyester silo for this, but I noticed the feed was always a bit stale and mouldy. With this new silo, I don’t have these problems anymore, and all the feed is fresh. “Whether the new silos for Aalbertesen result in a higher income, he cannot tell. “There are so many factors that affect the farm results”, he says. According to Van Drunen, the Mafa silos are 30% more expensive than polyester silos, but a lot cheaper than flat bottom silos. However, the feed quality is crucial for Aalbertsen. “The only feed they ingest is the feed from the silos and that should be perfect. Also my customer Cobb is happy that I chose this silo type.”

At the moment, around 40 of the Mafa silos are installed in the Netherlands and Van Drunen gets feedback that layer farms see a more consistent feed intake. Research from the Norwegian University of Life Sciences confirmed this by showing that Mafa silos can improve feed conversion with 3-5%, compared with conventional polyester silos.

A holistic approach to managing mycotoxins in poultry