The synergistic benefits of enzymes and probiotics have shown great promise in helping producers realise nutrition and performance improvements, while limiting the impact of necrotic enteritis. Here we take a glimpse at some of the recent trials.

Necrotic enteritis (NE) is recognised globally as one of the leading poultry disease challenges, costing the poultry industry close to USD$ 2 billion in 2015 alone. Historically antibiotics have been used to reduce the costly impact of these enteric diseases. There has, however, been a global elimination or reduction of antibiotics, resulting in a higher prevalence of NE and other costly diseases. NE may be present as an acute clinical disease or a subclinical condition. As a clinical disease, NE is characterised by a sudden increase in flock mortality.

While wet litter can be an early indicator of this form of the disease, often there are no warning signs. The subclinical form of NE, more prevalent in recent years, can be difficult to identify. In this case obvious clinical signs are lacking and there is no peak in mortality, as with acute NE. Instead, chronic intestinal damage remains undiagnosed, leading to poor digestion and absorption, decreased weight gain and increased feed-conversion, all of which amounts to significant production losses. Intestinal damage can allow the bacteria to infiltrate the body and colonise the liver, which can increase the number of condemnations at processing. Left undetected and untreated, subclinical NE causes the highest economic losses in the poultry industry. Several predisposing factors have been identified which render birds more susceptible to NE, including nutritional factors and coccidiosis.

An intestinal environment that favours the growth of C. perfringens is a key risk factor for the development of necrotic enteritis and nutrition is one of the predisposing factors in the development of the disease. Protein-rich diets or diets with high concentrations of poorly digestible substrate, specifically indigestible, water-soluble, non-starch polysaccharides (NSPs) found in wheat, rye, oats and barley, act as nourishment for bacteria. By creating an environment in which C. perfringens can thrive, protein-rich diets predispose birds to necrotic enteritis. In addition, physical characteristics of feed, specifically particle size, can influence the incidence of NE. For example, larger feed particle size promotes gut development, including development of the gizzard.

It is vital to understand the impact of nutrition on the incidence of NE when making decisions about feed. Feed producers often substitute other crops rich in non-starch polysaccharides (NSPs), as a cost-saving measure. As the quality of feed and its subsequent ease of digestibility is sacrificed, it is common practice to supplement with feed enzymes, such as xylanase, amylase, protease and others. These enzymes improve the nutritive value of cereals and other ingredients containing high levels of NSPs or other anti-nutrients and other substrates such as starch and protein, thereby enhancing the animal’s performance, in comparison to unsupplemented diets. Used in more than 90% of all broiler diets, enzymes enhance digestion of the feed for measurable benefits like absorption of nutrients and improvements in growth uniformity in flocks. They help break down soluble NSPs to increase nutrient absorption and reduce the viscosity of the digesta, thereby ensuring nutrient digestibility and absorption is more optimised. Enzymes also reduce the amount of undigested substrate reaching the hind gut, reducing the opportunity for microbial overgrowth (Figure 1).

Figure 1 – An optimised combination of xylanase, amylase and protease enzymes reduced the amount of undigested starch and protein in the lower gut by 43% and 18% respectively.

Enzymes can positively affect the gut microbiota by reducing the amount of undigested substrates through improved feed digestibility but also producing specific compounds (e.g. oligosaccharides) used by beneficial microflora. This is crucial since optimal nutrition and a balanced gut microbiota are the 2 components that work in tandem to enable healthy performance. A balanced microbiota plays a vital role in inhibiting the colonisation of potential pathogens, supporting immune development and providing nutrients to the host. However, the establishment of a mature and beneficial microbiota, a process known as microbial succession, takes time. Expedited production schedules leave little time for birds’ microbiota development.

Probiotics have become recognised for their ability to support the establishment of a positive gut microbiota in animals. Feeding probiotics from day one promotes the quick establishment of a positive microbiota and guards against colonisation by coliforms, such as C. perfringens, that may have a negative impact on performance, such as C. perfringens. Spore-forming Bacillus strains are often favoured for use in animal feed due to their ability to withstand harsh conditions during pelleting and survive the hostile conditions of the upper GIT.

In 2 recent trials, a 3-strain Bacillus probiotic and its effect on the growth performance of chicks challenged with C. perfringens were studied. As expected, the birds challenged with NE experienced reduced weight gain and increased feed conversion ratio (FCR). The birds fed the 3-strain Bacillus probiotic* experienced reduced mortality and lesion scores, as compared to the challenged birds. At 42 days, bodyweight gain increased and FCR improved by 17 points, the equivalent of a $ 130,000 savings per million birds (Figure 2). Another trial looked at the effect of an enzyme/probiotic combination. It was shown that this improves performance for birds under a C. perfringens challenge greater than the additives fed individually. Body weight and feed intake were recorded on days 1, 23, 35 and 42. Over the course of the growout, birds receiving the combination of enzymes and probiotics demonstrated the best feed conversion ratio, as compared to birds treated with the enzymes or the 3-strain Bacillus probiotic alone (Figure 3). 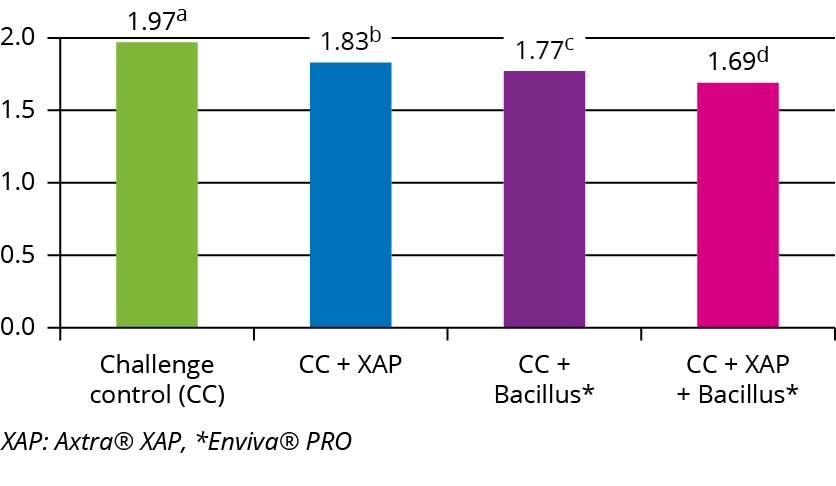 As the industry-wide search to find an antibiotic alternative for necrotic enteritis treatment continues, new solutions are arising that take nutrition into account. Considering that raw feed materials make up approximately 70% of overall production costs, innovative nutritional strategies will be required to meet demands in broiler growth while keeping production profitable. The synergistic benefits of enzymes and probiotics have shown great promise in helping producers realise nutrition and performance improvements, while also limiting the impact of NE.

A new class of feed probiotics is under development in Russia

Webinar on demand: Potential of GAA supplementation in broiler diets