The positive effects of hybrid grinding

A feed pellet’s shape and size is very important for animal performance. Hybrid grinding can improve pellet durability, more uniform particle size distribution and lower electricity use. In this article we explain what this involves.

Animal nutritionists are seeking optimal particle size distribution for different feeds in order to achieve efficient animal production. The animal production industry frequently uses pelleted diets. Physical pellet quality is one of many factors that determines the overall feed quality. It was reported in dozens of scientific articles, that the effects of feed particle size on animal performance, nutrition and animal health might be maintained even after pelleting. The general consensus among poultry nutritionists suggests that particle sizes of broiler diets, based on cereal grains, should have an optimal particle size distribution between 600 and 900 μm.

Data suggests that fine grinding increases availability of the feed material for enzymatic reaction in the digestive system, however with decreased health benefits. Scientific evidence however shows that coarser grinding produces more uniform particle size, which improves the performance of poultry fed with the mash diets. Coarser particle size has a positive effect on gizzard development that is associated with increased grinding activity and gut motility and thus better digestion of nutrients. Finer particles improve physical quality of pellets, however, it also increases energy consumption during grinding. A positive effect of coarse feed particles was also observed on rumen pH uniformity at the time scale from 2 to 23 hours. However, cracked, coarse grinded or fine grinded cereals do not influence the dry matter digestibility in the cattle. The swine performance and digestibility are both influenced negatively by coarser particles where the weight gain and feed conversion ration decreases. The ulcer formation in swine decreases by introducing the coarser particles in the diets, from 2 to 4 mm, however, the content of starch in swine faeces increases. That can explain the energy loss and lower body mass gain in swine when fed coarse feed particles. Different technological approach, hammer milling compared to roller milling, influenced higher digestible energy content in the weaner pigs.

In the animal production industry there is a need for efficient and optimised feed production in respect to energy expenditure during grinding and feed manufacturing. Systematic investigations on relationships of the feed particle size and diet uniformity with overall animal performance, gut health and physical pellet quality are necessary. The extent of grinding is influencing improvements of technical and nutritional quality to certain level (Figure 1). Finding balance between technical and nutritional quality for each animal species is utterly challenging.

Figure 1 – Extent of grinding and improvement of technical and nutritional quality of pelleted feed. 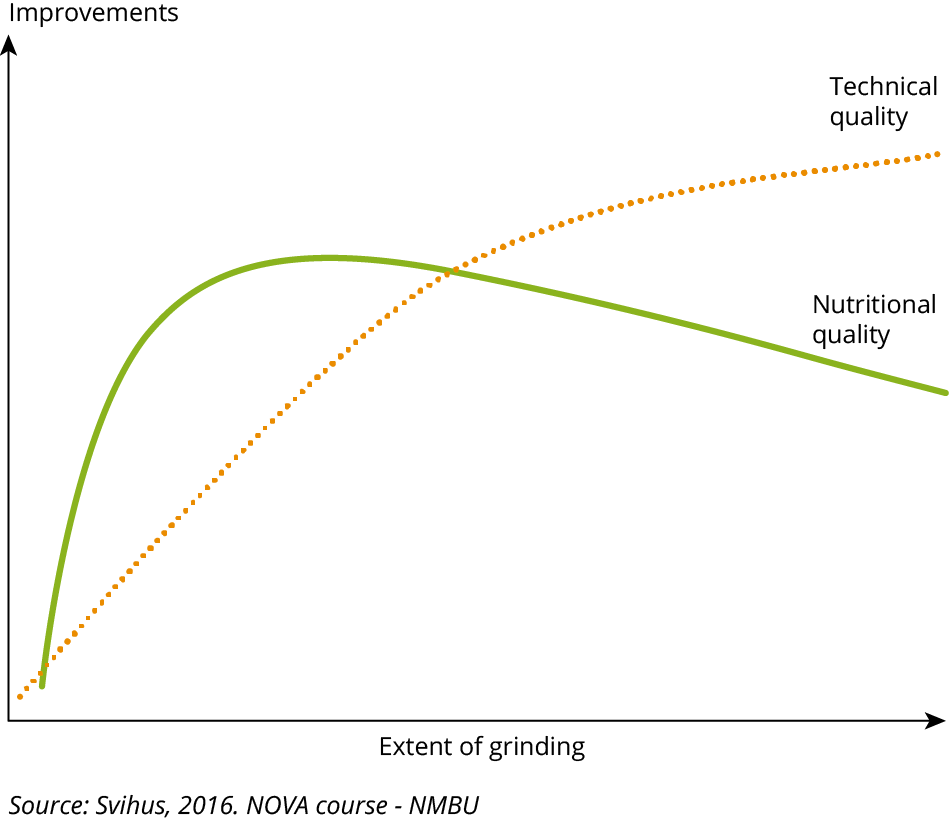 The main goal of the research explained in this article was to optimise particle size uniformity and better physical pellet quality of pelleted wheat and barley. These 2 cereals were chosen due to their typical occurrence in the animal feed diets. Compared grinding techniques in this investigation was hammer milling, with the screen size of 3 mm and hybrid milling. Hybrid milling was established by roller milling of 1.5 mm distance between 2 sets of rollers, as the pre-grinding process, and thereafter the hammer milling process with the screen size of 3 mm. The electrical energy expenditure was compared between those 2 grinding techniques. Also, the total energy consumption after grinding and pelleting was recorded. Recording the electrical energy consumption during grinding and pelleting was done with HIOKI clamp-on sensors. Samples collected after grinding (mash) and after pelleting and cooling (pellets) were subjected to dry sieving (mash) and wet sieving (pellets) in order to examine possible influence of the pelleting process on final particle size distribution in the product. Pellet durability index (PDI %) was measured with New Holmen durability tester for all the samples, which were having equal moisture content of 12%.

In this study, the overall electrical consumption was evidently increased by using the hybrid grinding technique, due to drift of 2 electro-engines used for grinding. However, the consumption of the electricity during pelleting seems not to be influenced by particle size distribution, derived from various grinding techniques for wheat grains. During pelleting of the barley grains, a minor indication for decreased electrical consumption (Figure 2) with hybrid technique was observed. 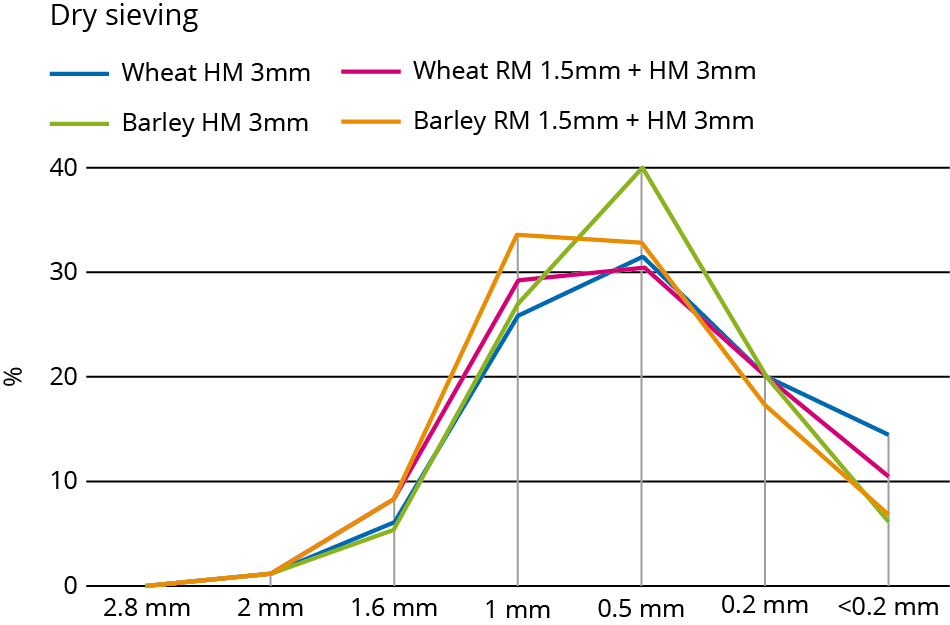 For both, wheat and barley pellets, the hybrid grinding technique had significant effect on higher pellet durability. The wheat grains, grinded with hybrid technique and thereafter pelleted, showed increased PDI values in average by 0.9% when compared to hammer milling technique. For barley pellets it was observed higher durability for 0.5% when hybrid grinded mash was used (Figure 5). Such increase in durability index may be explained by better packing of the particles during compaction in the pelleting process, and covalent bonds between particles. Obtained particle geometry after hybrid grinding and interaction between particles during compaction might influence the flow of grinded materials and interaction between the active molecules of the particles. Attraction forces between particles are dependent on surface-properties between particles, defined by van der Waals forces. In addition, double grinding defined as hybrid grinding, was perhaps influencing the electrostatic forces developed from particle surface changes. Such fluctuations in electrostatic forces is greatly dependent on surface conductivity and thus the charge of high binding potential at the particle surface. The optimal change of particle geometry and more uniform particle size distribution, derived from hybrid grinding, may influence increased durability by the interlocking bonds between particles, which may be important during adsorption of particles one to another. The point of interaction here are physical contacts where the distance is so small that the binder bridges can form several interaction sites on only 1 particle and thus higher durability.

The average feed mill spends about € 900,000 annually, only on the electricity. Grinding and pelleting process are vast contributors in this expenditure, therefore the particle size reduction by different grinding techniques needs to be examined more closely. If there is need for efficient and optimised production, in respect to the energy expenditure for grinding and feed manufacturing, the optimal modelling for grinding techniques need to be explored and selected according to few important factors. Such factors are associated with the economy, convenience, optimal utilisation of the equipment, operating conditions, personal preference and overall the product requirement. The hybrid grinding might make a significant contribution to better physical quality and easier feed manufacturing only if such hybrid device uses only 1 electric engine, or in other sustainable way.

The author would like to thank to Ismet Nikqi, the production manager at Centre for Feed Technology from the Norwegian University of Life Sciences, for his skillful and valuable help with choosing the grinding techniques that were selected for the experiment.

References are available from the author upon request (dmilad@nmbu.no).

Impact of pelleting on lamb performance and profitability

A look inside the new Feed Technology Centre