To feed the increasing world population we need to increase food production. But the feed industry can help as well to make sure that less human food crops, and more non-edible biomass, is used to feed animals, in particular fish diets.

In recent years, the price hike for feed raw materials, in global and national markets, has resulted in an increased number of malnourished and hungry people. Even though the awareness of the general public and policy-makers has been increased, the fragility of the global food and feed system remains. Optimally, an adult person needs to consume 60 g of protein per day. To feed enough protein to the world’s population by 2050, about 790 million tonnes of protein will be required. This number is 50% more than today’s production. Beef cattle need about 100 kg of feed to produce 5 kg of body-mass, which could be interpreted as 1.3 kg of pure protein.

This calculation does not match the protein demand in the future. Luckily, this awareness has been partially translated into effective action by the EU to make the secure-feed-to-secure-food concept better prepared in order to respond to long-lasting demands of the world’s population growth. The global feed industry also has an important role in this and needs to start the feed-protein revolution to ensure that the world population will be able to have access to food in the future. This means that we have to move away from the ‘so called’ first generation feed sources.

Feed raw material sources can be defined through three generations. First generation feed sources are commercially available. However, it is in direct competition with human food supply and depends on vast resources of arable land, irrigation and fertilisers. The second generation is less competitive with human food and not based on arable land and irrigation. Second generation feed sources are based on insects and microbes and its usage is challenging due to getting into new technologies and unknown demand. A third generation of aqua feed source is recapturing nutrients from, for example, dairy and pig farms’ wastewater. Science is already developing technologies that can recover phosphorous and nitrogen (N) from manure. These technologies are economically feasible, however markets are quite immature.

Aquafeed is a great example of where big steps can be made in the protein revolution. The feed-grade materials used in aquatic feeds are traditionally based on fishmeal and soybean meal. Globally, more than 80% of soybean produced is used for manufacturing animal feed. Fishmeal is manufactured by processing the wild catch, where most of the time problems such as overfishing remains. About 25% of the world’s fish catches are used as animal feed. In the end, this is not a sustainable way of feeding farmed animals and a sustainable economy with the use of novel feed ingredients is therefore unavoidable (Figure 1). Here we explain further, which novel feed sources hold the potential to replace or partially replace the ‘unstainable’ soy and fishmeal. 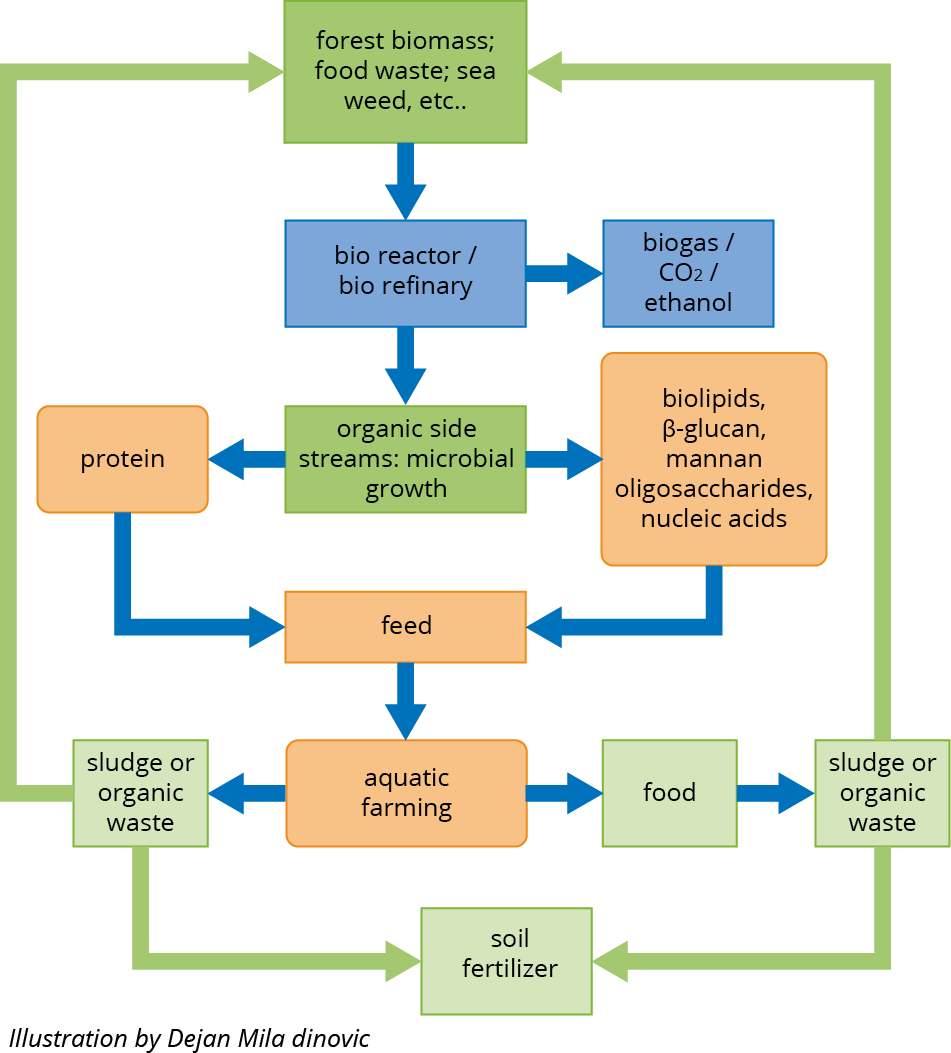 A great example of second generation feed sources are microalgae, yeast and bacterial biomass. These single cell organisms are proliferating much faster than any other biomass on the planet, with an excellent amino acid profile in its protein and with a high digestibility rate in the research model animals. The production of such protein does not compete with any other established food-protein sources. Growth of single cell organisms and thus their protein is many folds faster than any other protein source. Growth rate for microalgae is once a day. The growth rate of yeast is every 2 hours and for bacteria every 20 minutes. Microalgae are well known as immune boosters and unlimited source of protein. The space required for growing microalgae is quite insignificant. Overall, microalgae do not require any arable land, or a freshwater supply. The harvest of microalgae can be all year round and for example, in the worst case scenario, in the south of Spain, it can be produced 27 ton/ha a year. The optimal production could be roughly 1 kg of algal biomass (dry matter based) on 1.5m2. However, the open pond systems are the ‘timeworn’ systems being replaced by new and more efficient systems like photobio-reactors, flat panels and tubular systems. With such new systems, the production-optimisation is exponentially increasing. As well as protein, the microalgae contain valuable polyunsaturated fatty acids, which are a more sustainable source of such valuable nutrients for the aquatic organisms than fish oil. Microalgae are rich sources of pigments, chlorophylls, carotenoids and phycobiliproteins. The inclusion of microalgae in diets for various fish and crustaceans produced a pool of scientific evidence of a positive growth effect and increased intestinal functionality. Due to the chemical composition of microalgae, they are a promising alternative for enhancing the nutritional value of conventional aquatic feeds, as a partial substitute for fishmeal for intensive aquaculture. The pool of scientific literature is suggesting that the inclusion rate of microalgae as high as 20% is recommended due to the positive effect observed on the functionality of the digestive systems in aquatic farmed species.

Aquatic feeds are traditionally based on fishmeal and soybean meal. Photo: Dreamstime

Various scientific research concluded that yeast represents sustainable ingredients in aquatic feeds due to its ability to convert low-value biomass into high-value feed ingredients and almost without dependence on agricultural land, water, or climate change. Depending on the species and strain, yeast can be produced from fermentation of sugar-rich feed stock or lignocellulosic biomass from food waste or waste derived from the agriculture industry or forestry. Advances in fermentation technology has resulted in more efficient and cheaper yeast production, making yeast economically more feasible as a nutrient source for aquatic feeds. In optimal conditions, annually 10 mg of yeast can produce 150 tonnes of the yeast-cell biomass. A study conducted at the Swedish University of Agricultural Sciences in Uppsala showed that the yeast species level in the diets had no effect on gut microbiota. Yeast species found in feed diets were not found in the fish gut, which demonstrations the full digestibility of the yeast materials. A study carried out at the Norwegian University of Life Sciences showed Candida utilis and Kluyveromyces marxianus to be good protein sources in Atlantic salmon diets. These single-cell organisms showed possibility to replace up to 40% of protein from high-quality fishmeal, without any harmful effect on fish growth performance, digestibility or nutrient retention. Low levels (4%) of inactive brewer’s yeast improved growth performance and modulated intestinal microbiota in different fish species.

Bacterial Protein Meal (BPM) is another example of a second generation feed source and is a protein source produced by aerobic fermentation of natural gas as energy / carbon source and ammonia as N source from Methylococcus capsulatus, Ralstonia, Brevibacillus agri and Aneurinibacillus. The bacterial biomass is heat sterilised and spray-dried to obtain a dry and stable product. Such material contain about 70% crude protein and up to 10% lipids. A study at the Norwegian University of Life Sciences showed that dietary supply of BPM provides one third of N intake with sustained production performance. When BPM made up 50% of dietary N there was no hostile effects for growth of the Atlantic salmon. BPM in mink, as the model animal for fish, had high faecal digestibility of N, about 80%. BPM gives the same retention of nitrogen, heat production and energy retention as fishmeal.

A small step towards the feed protein revolution was a vote by the EU Commission in December 2016 to allow insect derived protein (second generation feed source) in to the aquaculture feed market. Such legislation fits well with the blue revolution, which could also help rural and biomass-fatigue regions. Insects together with microbial organisms offer vast market potential. Feed conversion and the growth of insects is high. About 2 kg of organic by-products is needed to make 1 kg of insect-based protein with required space of 1m2. Insect meal has a protein similar to fishmeal. In addition to that, insect meal can contain high-grade fatty acids. About 30% of fishmeal can be successfully replaced by insect meal for small fish diets. In the feed for whiteleg shrimp (L. vannamei) 50% of fishmeal could be replaced with insect meal. In Norway researchers managed to replace up to 100% of the fish-protein in salmon diets with no adverse effects on fish growth or later on the peculiar taste of fish fillets.

Find out more about some of the protein alternatives for soy that are currently seen as promising for livestock and fish diets.

Peer-reviewed science has shown that consumption of microbial and insect meal by animals have no impact on the taste of food products derived from animals fed diets with mentioned novel feed protein ingredients. The greatest task however is to persuade the consumer. Changing the mindset of the consumer about all the benefits of these novel feed ingredients is the greatest challenge for this great feed protein revolution.

Mycotoxins in aquaculture: A mitigation approach in turbot