Regulate the use of food waste as feed

A remarkable news item in December 2015 about researchers launching a plea for the re-legalisation of swill feed for pigs. Remarkable, as it happened in the UK, the country where swill feed caused Foot-and-Mouth Disease leading to a swill feed ban. What are the motives behind the plea?

While swill continues to be used in small-scale pork production across much of the world, its use is controversial in some countries and there is great geographic variation in its acceptance and regulation. Swill was banned in the European Union (EU) in 2002 after the UK Foot-and-Mouth Disease (FMD) epidemic (thought to have been started by the illegal feeding of uncooked food waste to pigs), but is actively promoted in nations such as Japan, South Korea, Taiwan, and Thailand. In this article, we take a closer look at these modern East Asian systems of food waste recycling, and consider the economic and environmental case for re-legalising the use of swill in the EU.

Though swill is currently illegal in the EU, this wasn’t always the case. Swill was the dominant pig feed in the early 20th century and was promoted by the UK government during the Second World War to boost food security. The popularity of swill-feeding declined after the War as the abundance of cheap grains led the pig industry to focus on increasing production efficiencies through grain- and soybean-based diets.
The risks of feeding uncooked food waste were demonstrated in 2001 when a UK farmer illegally fed some to pigs, precipitating the 2001 FMD outbreak, which cost the UK economy £8 billion (€10.4 billion). In response, swill-feeding was banned in the UK in 2001, with the ban extended across the EU the following year.

While the EU saw swill only as a disease risk, other nations saw it as a potential resource. Heat treatment deactivates viruses such as FMD and Classical Swine Fever (hog cholera) and renders food waste safe for animal feed. In the same year that the UK banned the use of swill, the Japanese government launched an initiative to promote the regulated use of food waste in animal feed.

Today, Japan and South Korea recycle around 40% of their food waste as feed. In these countries, the industry is tightly regulated: the heat treatment of food waste is carried out by registered ‘Ecofeed’ manufacturers, who are required by food safety law to heat treat food waste containing meats for a minimum of 30 minutes at 70°C or 3 minutes at 80°C. Food waste feed is typically fed as a dehydrated pellet, or a fermented, liquid feed – both technologies have been shown to sterilise the food waste and increase the feed shelf life without destroying nutrients. Since the introduction of these regulated systems, there have been no swill-associated outbreaks of disease.

In Japan and South Korea, swill is seen as a strategic resource: it is a cheap, domestic alternative to the more expensive, volatile international market for grain- and soybean-based feeds. Pigs reared on food waste produce pork of high quality – practically indistinguishable from grain-fed pork. And though swill-fed pigs tend to grow more slowly than when fed conventional, grain-based feed, (because swill has a more variable nutritional content) the costs of slower growth are more than offset by the savings in feed costs. 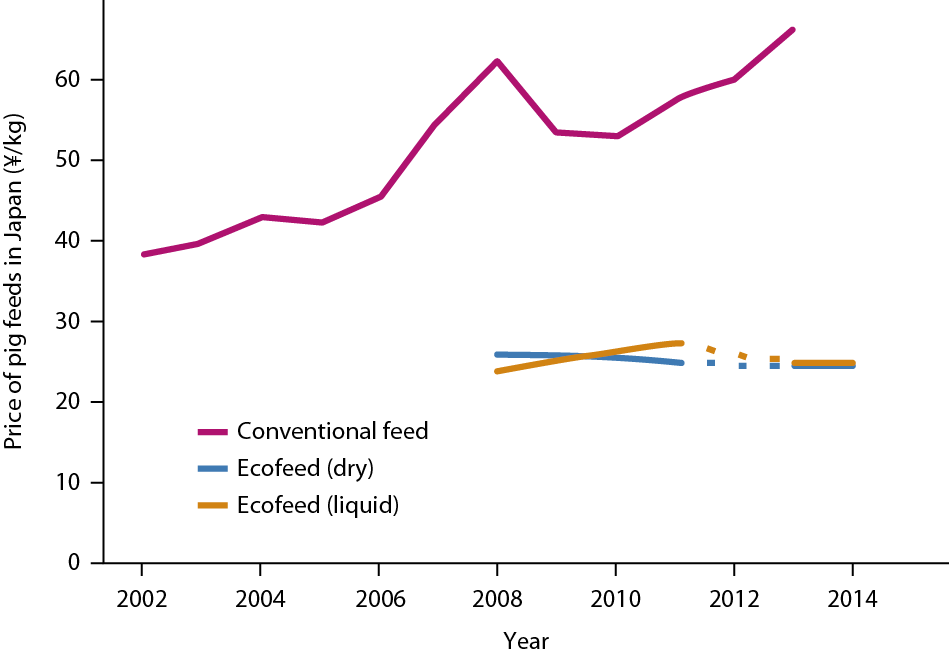 The switch to swill benefits not only farmers’ wallets, but also the environment. When farmers replace grain- and soybean-based feeds with swill, they reduce demand for these land- and greenhouse gas-intensive feeds. The research team at Cambridge University recently estimated what the environmental benefits would be if the EU were to introduce food waste feeding systems, like those in East Asia – and found that the benefits would be substantial. East Asian style food waste recycling would spare 1.8 million hectares of global farmland, an area half the size of Switzerland, including more than a quarter of a million hectares of Brazilian soybean. The expansion of soy in the grasslands and forests of Brazil is associated with large greenhouse gas emissions and biodiversity loss. Because of these benefits, in Japan swill-fed pork is marketed as a premium, low environmental impact product (‘Eco-pork’) and receives an associated price-premium, which further boosts farm profits.

While pigs have a long history of swill-feeding, food waste can, of course, be fed to other species. A number of studies have trialed food waste diets for poultry, fish, insects, and ruminants (cattle, goat and sheep). Food waste containing meats should not, however, be fed to ruminants to prevent the emergence and transmission of prion diseases, such as Bovine Spongiform Encephalopathy (BSE). In Japan and South Korea, the use of meat wastes in ruminant feed remains illegal for this reason. It is worth noting, however, that there are no recorded cases of pigs, poultry, or fish naturally developing or transmitting diseases such as BSE.

The use of non-ruminant processing animal proteins (PAP) for use exclusively for fish feed has been re-authorised by the European Commission last week.

Whilst the disastrous FMD outbreak of 2001 showed the potential risks of feeding uncooked food waste to pigs, banning the use of swill was not the only possible solution. Nations such as Japan and South Korea offer working models for the safe, regulated use of food waste as animal feed. As the EU faces both a deficit in protein sources for animal feed and calls to create a zero-waste, circular economy, there is a growing mandate to reconsider the ban on swill. Regulating, rather than prohibiting, the use of food waste as pig feed could safely produce high-quality pork, with substantial economic and environmental benefits.

This article was published earlier online in Broadening Horizons N°22, in December 2015. The publication is a cooperation between the UN Food and Agriculture Organization (FAO) and the French National Institute for Agricultural Research (INRA).