Commercial feeds are used in rainbow trout production currently, thus multiple mycotoxins present in feeds are carried over into ?the fish. This co-occurrence ?not only causes economic losses but also exposes ?final consumers to mycotoxins.

Mycotoxins are secondary metabolites produced by filamentous fungi which can have adverse effects on animal health and productivity with consequent economic losses.  Aflatoxins, ochratoxin A, deoxynivalenol, fumonisin, T-2 toxin and zearalenone are the most relevant mycotoxins to animal production. These toxins are produced by species of the genera Aspergillus, Fusarium, Penicillium and Alternaria.

Ingredients found in commercial rainbow trout feed which may carry mycotoxins include soybean expeller, disabled soybean, corn, wheat, wheat bran, corn gluten meal, soybean oil, fish meal, fish oil and chicken meal. Some of the effects of toxins in rainbow trout feeds include reduced feed intake and growth rates, estrogenic effects, hepatic damage, anaemia, haemorrhage, liver damage, kidney and liver necrosis, weight loss, increased susceptibility to secondary infectious diseases, nephrotoxicity and mortality. Aflatoxicosis outbreak cases have occurred around the world including in the United States, Germany, Mexico, Denmark. Nevertheless, there are previous works reporting the presence of a single mycotoxin or the co-occurrence of 2 of them on different types of feeds, when the current prospect should include a more realistic scene in which more than a mycotoxin can be contaminating raw materials intended for food and feed manufacturing, and finally in feeds. Following this trend it is necessary to have a complete risk profile of feeds studying the co-occurrence of multiple mycotoxins.

A study was therefore carried out to determine the toxigenic mycobiota, including enumeration and identification of mould genera and species, and quantification of the major mycotoxins on rainbow trout finished feeds from hatcheries in Argentina. Samples include different fish life cycle stages (starter, grower and finisher).

Moderate levels of fungal counts were determined on rainbow trout feeds. The Good Manufacturing Practice establishes a limit of hygienic feed quality set at 1×104 UFC/g on DRBC. According to the results, 10.7% of the samples exceeded this hygienic limit. Also, the mycological quality was determined according to Gimeno in which samples can be qualified as good (count range <3×10>4 UFC/g), regular (count range 3×104-7×104 UFC/g) and bad (>7×104 UFC/g). According to this criterion 96.4% (27/28) samples were qualified as good, and 3.6% (1/28) as regular. A high fungal count is indicative of a poor quality of raw materials and/or poor manufacturing practices. The presence of fungal growth in raw materials affects the nutritional feed quality as well as organoleptic properties. Thus, feeds that do not meet the hygienic quality criteria are a risk to animal health. Contamination levels are variable depending on several factors, among which are weather conditions, processing and storage condition of feeds.

The most prevalent mycotoxigenic fungi determined in the samples were the Eurotium genus found in 25% of samples, followed by Penicillium in 21% of samples and Aspergillus. Cladosporium, Trichoderma and other mitosporic Ascomycetes were also found. One genus belonging to Zygomycetes, Mucor, was determined, as well as high levels of yeast contamination (Figure 1). Considering the frequent presence of Eurotium and Penicillium species, further studies should be done regarding the toxicity of Eurotium and Penicillium mycotoxins in fish and its occurrence in finished fish feeds. Furthermore, Eurotium and Penicillium species could be able to produce a wide range of toxic compounds. The individual toxic effect of toxins produced by the genus Aspergillus and Fusarium have been widely studied in animals. However, it is necessary to know which effects are resulting from a toxin combination in the exposed animal.

Regarding mycotoxins, it was found that all samples analysed were contaminated: 50% contained aflatoxins (median 2.82 ppb), 3.6% deoxynivalenol (median 230 ppb), 25% ochratoxin A (median 5.26 ppb), 64% T-2 toxin (median 70.08 ppb), and 50% zearalenone (median 87.97 ppb) (Figure 2). Of the samples, 28% had a fumonisins contamination levels below the detection limit. Co-occurrence of at least two out of six mycotoxins was recorded in 93% of the samples. Co-occurrence of six mycotoxins was determined in 7% of the samples. 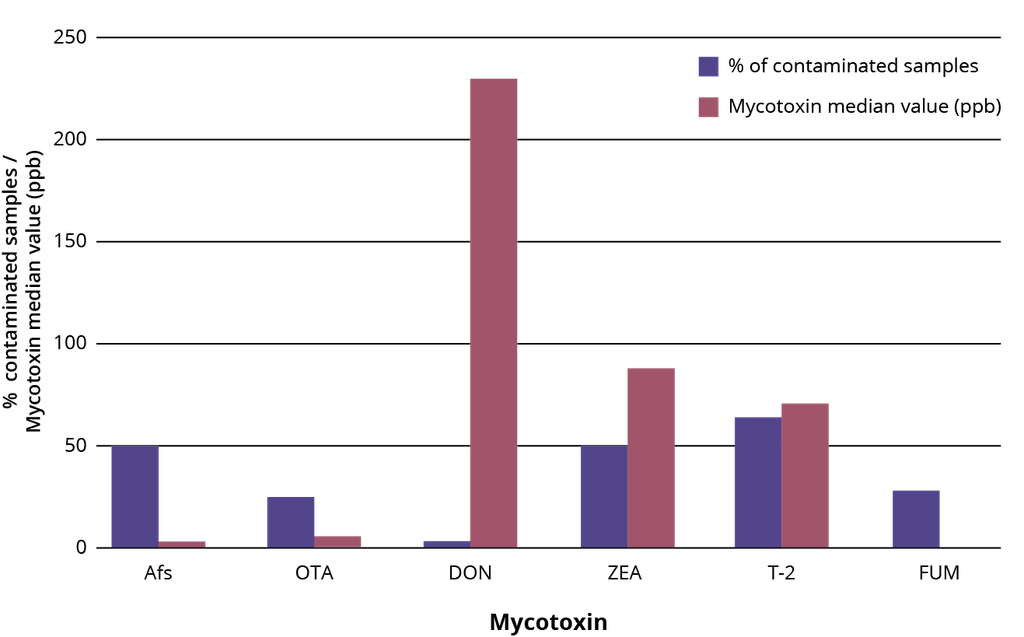 In the study it was determined that 26 out of 28 (93%) samples were contaminated with fungi and all samples were contaminated with at least one mycotoxin. However, it is not a frequent situation to find an excess of those limits. The most frequent situation is a low level of multiple mycotoxins. Here, it was found that mycotoxin co-occurrence was a common feature. Moreover, not necessarily the presence of a particular toxin was correlated with the presence of the possible toxin producer mould. Some fungi do not have the ability to grow on dry feed, thus, it is possible that mycotoxins are produced in the field and then are present in final feeds when raw materials are used in feed manufacturing. Moreover, mycotoxins are heat stable, whereby inactivation of the toxins is not achieved during the manufacturing process.

Although scientific literature provides extensive information regarding the individual effects of mycotoxins on different animal species, the focus should be on multiple exposure as this is the most likely situation in feeds. The attention should therefore be focused on the co-occurrence and synergistic effects of mycotoxins even at low levels in order to avoid contaminated feed consumption that may cause acute or chronic illness and lead, therefore, to economic losses. It should also be taken into account to what extent mycotoxins can reach edible tissues such as meat, eggs, milk, etc., when animals are fed with  contaminated feed.

The detection of mycotoxins in this study was below the limits established by the EU regulations/recommendations. However, the simultaneous presence of several mycotoxins was demonstrated. Based on these results, applying a continuous monitoring strategy for moulds and mycotoxins to prevent contamination of feeds is recommended.