Mycotoxins: Cows are not fully protected

Ruminants are commonly considered ‘protected’ to mycotoxins owing to the detoxification action of rumen flora. However, recent scientific studies have shown that only 20 to 40% of mycotoxins are really detoxified in the rumen.

Thanks to the capacity of the ruminal microbial ecosystem to degrade or convert mycotoxins into less toxic metabolites, ruminants are generally considered less sensitive to mycotoxins than other animals. However, ruminants can be negatively affect by mycotoxins, which may impact performances. Mycotoxins can have various effects on ruminants: depressed feed intake, decreased zootechnical performances, reproduction issues, and milk quality issues, such as increased somatic cell count (SCC).

In this context, the market of the anti-mycotoxin solutions contains a variety of products designed to counteract their negative effect. However, many products vary in research and efficacy. One of these solutions* (hereafter called the ‘product’) was tested in real farm situations, where the product was tested for its efficacy against trichothecenes, zearalenone, and fumonisins. The research was conducted on a total of 715 dairy cows, in lactation, spread over nine French farms. The Total Mixed Ration (TMR) was naturally contaminated by mycotoxins. A full HPLC analysis was done in order to evaluate the contamination of each diet. The sample was taken at the exit of the mixer or in the feeder depending on the farms. All the samples were positive to mycotoxins and counted a minimum of three mycotoxins per sample with variable levels of contamination (Table 1). The experimental design was defined as follow, a first control period of two months in order to collect the results before the introduction of the product (dairy controls and diet analysis). Then, the experimental period started and lasted two months. The product was distributed at 100 grams per cow per day (mixed into the mixer or in top-feeding depending the farms). The feed, during the whole trial period for each heard (control period + experimental period), did not face any variation. In order to compare every cows, and herds, all data have been statistically corrected by several factors (lactation rank, stage of lactation, herd of origin). The statistic model has also been corrected by an average value of the mycotoxins contaminations when they had a significant influence.

Effect on performance and production

The results are based on the data of monthly individual official milk controls and milk tank results (three times/month/herd) recovered at the end of the trial period. The production data of the cows present during the four months of the study have been analysed (cows which calved or have been dried during the study period have been excluded of the analysis). Thus every cow taken into account for the result has been fed with the same quantities of the product for the different controls.

Milk production (Figure 1) was very stable during both periods (control and experimental). After the beginning of the product supplementation, the milk production increased significantly (p=0.015) by around 2 kg/cow/day, and stayed stable at this higher level during the second month of experimentation. These data have been corrected by every factor which can have an influence on the production performances of the animals. Only data from cows in lactation, during the whole four month-period have been analysed. The period effect (control versus trial) was tested on the whole population, and then on sub-groups defined according to their contamination level, through ANOVA method, taking into account the rank and the stage of lactation as covariates.

Figure 1 – Evolution of the milk production during the trial period. 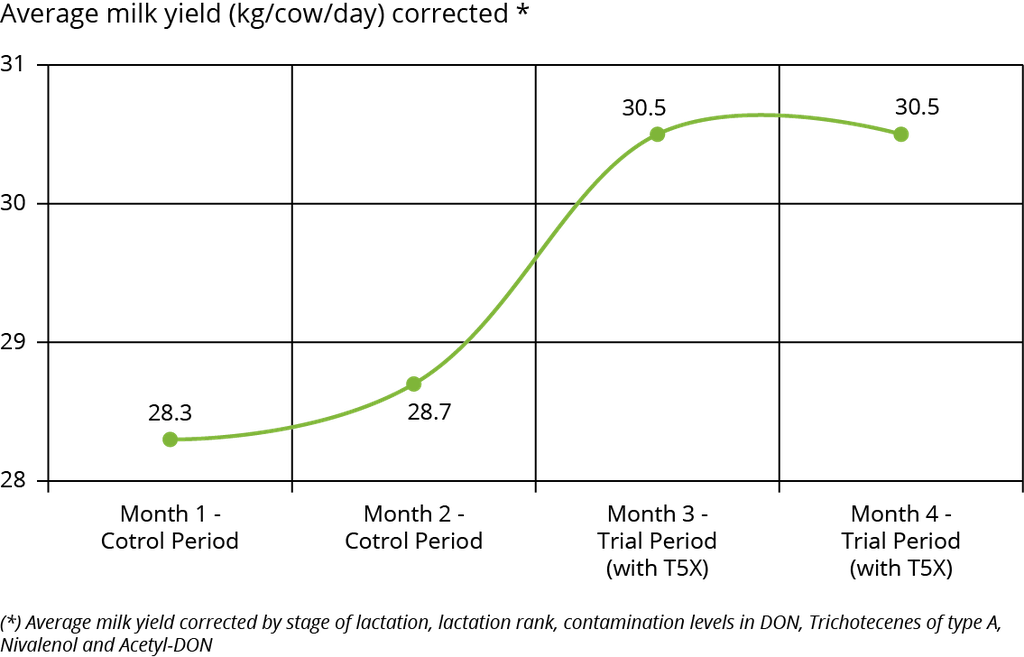 For only one herd in the trial it was able to weigh the total quantity of TMR distributed and to also to weigh the feed refusal on weekly regular base. After three weeks of experimentation, dairy cows consumed about +5 kg crude material per day, which is about +2 kg of dry matter (+12%) (Figure 2). Generally, the concomitant augmentations of milk production is due to a better assimilation of the energy from the diet. This can mean that the product can boost the consumption, or lead to a better valorisation of the TMR by the animals.

Figure 2 – Evolution of the feed consumption during the trial period (one herd). 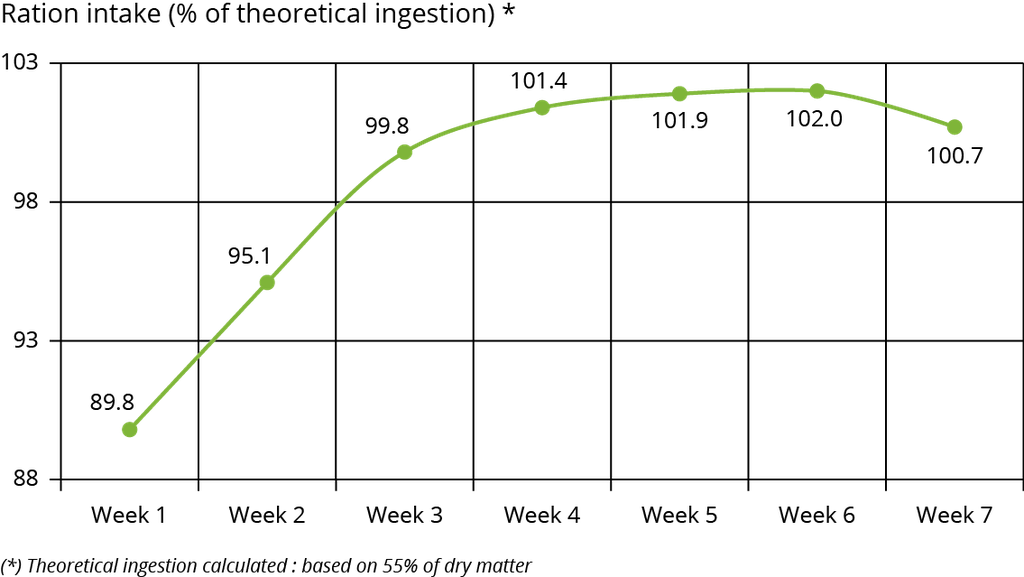 The analysis of the effect of the product has been done with the tank milk controls data (three times per month). These values are an average for each herd (no individual data). The cows in clinical mastitis and under medical treatments were not considered in this analysis (discarded milk). During the control period, the somatic cell counts are very variable, but stay at a high level (> 300,000 cells/mL). With the product, an average decrease of 50,000 cells/mL can be observed for all the herds (Figure 3). For six herds with abnormal cell counts before the supplementation by the product (> 350,000 for several months), five were able to observe a reduction of the cells counts by about 100,000 cells/mL. A regularity in SCC concentration was also observed during the product supplementation.

Figure 3 – Evolution of the somatic cells counts of the milk during the trial. 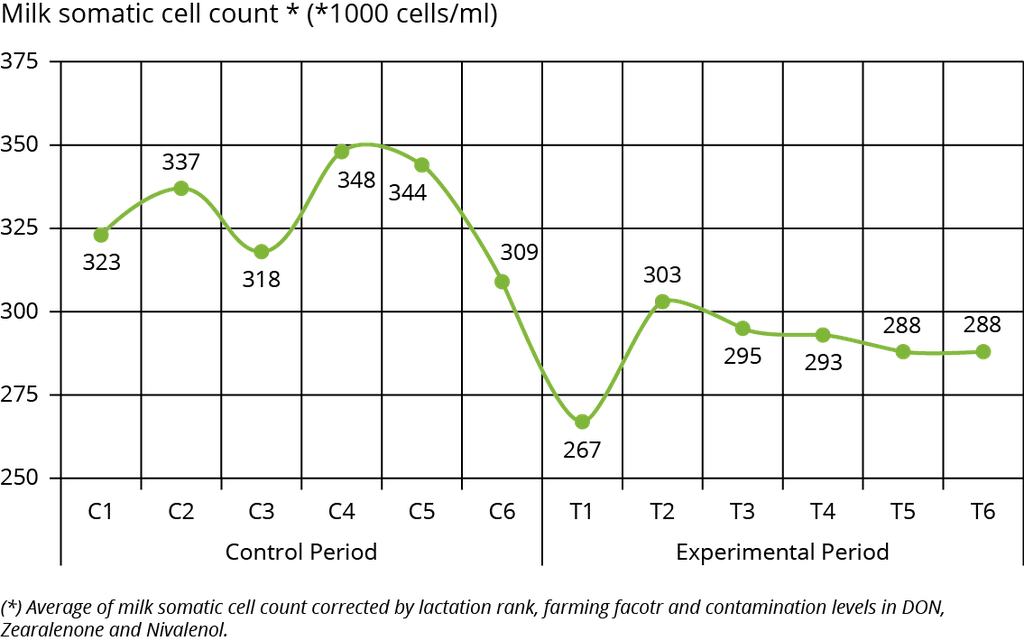 Acting in synergy with animals

Seven of the nine herds of the study had levels of contamination considered critical for the dairy cows (especially in DON, 15-ac-DON, nivalenol and zearalenone). The visible evolutions at the beginning of the experimental period can be correlated to the effects of the product on the zootechnical performances of the animals. The addition of the product into the feed resulted in positive evolutions such as a significant increase of the milk production of 2 kg/cow/day (p=0.015). These improvements of the performances can be explained by a higher assimilation of the energy of the feed, due to a higher ingestion and a higher valorisation of the feed. Regarding to the sanitary milk quality, the data from the tank analysis indicate that with the product, the level of somatic cells counts is more stable and lower, in comparison to the control period.

*T5X. References are available on request.