Sampling for mycotoxins in feed

Sampling protocols are a necessary control mechanism in the fight against mycotoxins in animal feed. This is especially the case for aflatoxins as they can be non-randomly distributed throughout the batch. A trial with TMR samples looked at the optimal number of samples to get the most accurate and precise outcome of the aflatoxins present.

The presence of mycotoxins, in particular aflatoxin B1, can cause significant health problems as well as severe economic loss, and is therefore regulated with respect to maximum acceptable concentration for various feed- and foodstuffs. International regulatory authorities have recognised the importance of representative sampling, and sampling guidelines have been formulated which only partly comply with the Theory of Sampling (TOS). Especially heterogeneity characterisation methods, which are a necessary requirement to develop valid sampling protocols or validation assessments of existing sampling operations, are currently not mentioned in existing guidelines. There are however structural guidelines for correctly designing experimental heterogeneity characterisations, allowing evaluation of sampling representativeness and determination of optimal number of increments per composite sample.

Among various mycotoxin types, aflatoxins are of major concern due to their potential impact on human and animal health (FAO 1993). Mycotoxins can occur within a concentration range of μg/kg to mg/kg. Due to the fact that the presence of mycotoxins in food- and feedstuffs cannot be avoided, valid testing is demanded, and therefore, sampling methods for raw and processed materials are a critical necessity. The US Department of Agriculture (USDA) and its Grain Inspection, Packers & Stockyards Administration (GIPSA) has estimated that inferior sampling accounts for nearly 90% of the error associated with aflatoxin detection (USDA 2014), mainly due to non-random distribution throughout materials when occurring in the trace concentration range (mg/kg or ug/kg).

The only comprehensive approach to representative sampling, which allows full control of all potential sampling errors, is the Theory of Sampling (TOS). Samples, whether in industry or science, are collected for making a variety of decisions, but always with the main purpose of significantly reducing the mass of the target material (decision unit) with the minimum necessary effort. In this case, the purpose is to obtain a primary sample that accurately and precisely represents the mycotoxin level of the decision unit. The Theory of Sampling provides quantitative measures of sampling methods, procedures and equipment covering the entire decision unit all the way until the analytical aliquot.

The reason for all sampling problems is decision unit heterogeneity, causing material to vary irregularly throughout the decision unit (also termed ‘lot’ in TOS). As correctly pointed out by TOS and USDA, the (primary) sampling error is the dominating error source in the full ‘decision unit-to-test portion’ pathway and is the prime priority before primary samples can be sent on to the laboratory. Once removed, no possibility exists to judge whether a sample is adequately representative, so there is no way to prove if the mycotoxins analytical results represent the true target material concentration.

Increasing the number of correctly extracted increments in a composite sample is the most effective way to decrease the primary sampling error, and will lead to results, which are closer to the true decision unit value. The difficultly is to determine the ‘optimal number of increments’, since this depends on heterogeneity, the analyte concentration level, and the size and decision unit geometry. In practice, sampling is often a compromise between the desired levels of accuracy/precision and labour/cost deemed necessary. The only criterion that is never up for negotiation is representativity.

In present field trials determining aflatoxin B1 levels in animal feed, all total mixed ration components are mixed in a predetermined ratio to form the total mixed ration (TMR). This is then spread out in elongated feed bunks. For each feed component, as well as the TMR, an individual sampling strategy determining the optimal number of increments has been developed, based on preceding material heterogeneity characterisations.

Figure 1 – Variographic result for TMR (including aflatoxin) for a number of increments in a composite sample and their corresponding relative uncertainty. Values of y-axis have been removed due to confidential reasons without any loss of generalisation potential. 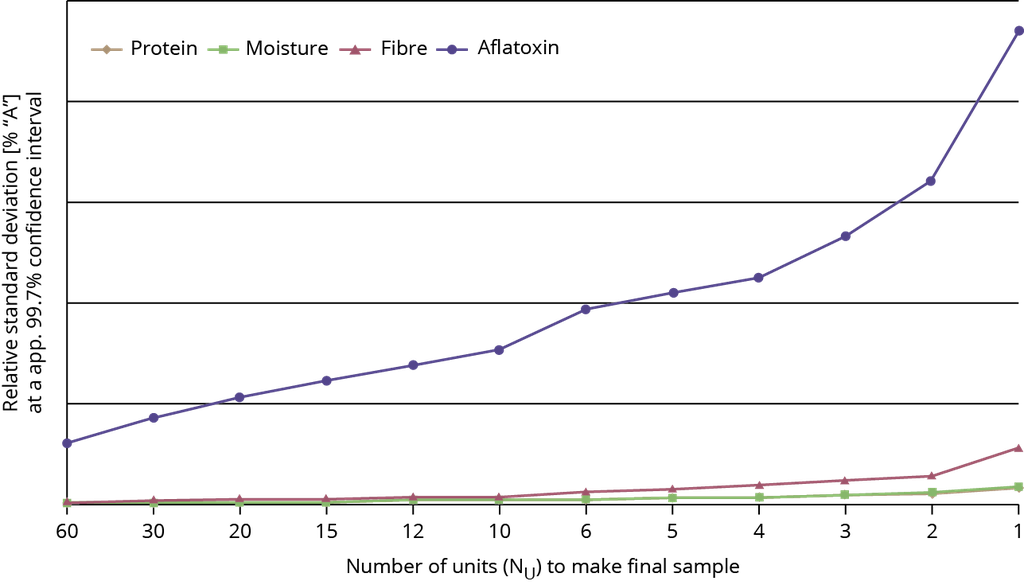 The heterogeneity characterisation of the TMR is based on a variographic experiment, for which 60 equally spaced increments have been extracted from the feeding lane using the described TMR sampling procedure. In a variographic experiment the collected increments are first treated as individual samples and are consequently mass reduced and analysed individually. Based on the individual incremental results the experimental variogram is calculated (Gy 1998).

For the field trials a specific uncertainty level on aflatoxin level in the TMR was preset, requiring that the applied sampling method and sampling frequency guarantee this uncertainty range. Figure 1 shows the variographic results of the control variables and aflatoxin B1 for the TMR, comparing the number of increments used for final composite sample with the corresponding relative uncertainty incurred. The exact numerical values of the corresponding uncertainty are not revealed due to confidentiality reasons.

The results show that the corresponding uncertainty for aflatoxin is dramatically higher (~10 times higher) compared to the control analytes. For this field trial the preset acceptable uncertainty level has been reached combining 10 samples for the final composite sample. In case a lower uncertainty level is required in the future, the appropriate number of increments to form the final composite sample can be selected directly from these existing variographic results, allowing full detection and uncertainty control of the aflatoxin concentration present in the TMR.

The main problem for detection of mycotoxins, and especially aflatoxin in feed, is their decidedly irregular, non-normal distribution in the target feed/food materials. Hot spot characteristics and trace concentration ranges make representative sampling critical for valid mycotoxins concentration control. Assessment of optimal sampling locations as well as selection of the appropriate sampling and mass reduction devices forms the basis for representative sampling. A primary consideration is to determine optimal number of increments, since practical sampling is a trade-off between labour/economic efforts and sample quality. Only when the effect to error from reducing the number of increments is known, an educated decision can be made. Variography can be used for this purpose, meaning to compare various sampling strategies based on their corresponding total uncertainty levels.