A better start for piglets

The inclusion of the purified yeast extract, Prosaf, in post-weaning diets has yielded promising results and can deliver a major boost to piglet performance.

Observed benefits of including the purified yeast extract includes increased feed intake, better gut health and improved piglet performance. The supplement also has good palatability and high digestibility qualities, factors which help encourage the rapid development of the young gut and enhance the immune status of the piglet.

The distinctive characteristics of the product include a minimum 63% of protein, high amino acids digestibility, alongside high levels of total nucleotides and glutamic acid – 7.7% and 10.9% respectively.

The product’s high glutamic acid content, which plays an important role in terms of palatability, is also valuable for gut development and for subsequent performance. High levels of glutamic acid also influences the taste acceptability of post-weaning diets.

To validate and scientifically prove the efficacy and potential of Prosaf supplementation in post-weaning diets, product trials were carried out to identify optimum inclusion rates, in combination with other functional proteins. The value of using the product under both low and high farm challenges was also studied.

In general, the product performed best when used as a 2% inclusion in a first pre-starter diet, moving to 1% inclusion in second phase feeding, which started two weeks after the beginning of the first diet. Diet assessments obviously depend on the nutrition program of the trial farm, a fact which Phileo’s researchers obviously took into account, concluding that the product’s full impact is achieved when piglets are able to consume between 160g and 200g of product in their first 28 days post-weaning.

In this article we focus specifically on the results of three trials, each designed to quantify the product’s ability to improve piglet performance and health, while also being capable of delivering a good return on investment (ROI). 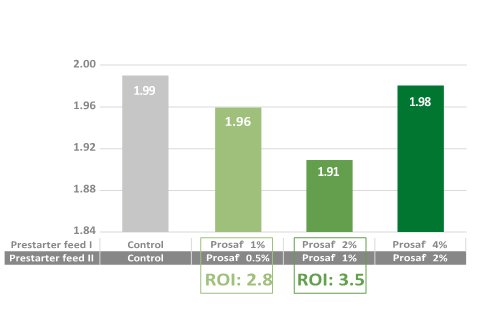 The improved performance was partially due to a better start being achieved by the supplemented piglets, with a higher feed intake (+10%) being recorded in the first 14 days after weaning, alongside a faster average daily gain (+36%). This suggests the functional proprieties of Prosaf not only helped to provide a more palatable diet but also promoted faster gut development, leading to a more efficient post-weaning gut.

Similar to the first trial, piglets given the yeast product had a faster start on the first pre-starter diet, achieved better feed intake (+12%) and better average daily gain (+23%), when compared to the control diet.

The third trial, carried out on a farm facing a high health challenge, involved piglets given the supplement (2% or 4%) for 15 days post weaning. This resulted in the number of culled pigs after weaning being reduced by 60%, an improvement in resistance which was due to the product promoting better gut health and general well-being.

Prosaf is a purified yeast extract with a distinctive composition compared to most other products on the market. The combination of its functional active ingredients, associated good palatability, amino acid profile and high digestibility, provides an innovative cost-effective tool for farmers to use in post weaning piglet diets.