Further reduction of antibiotics in animal production is a serious challenge. Unprotected sodium butyrate shows promise in promoting growth and productivity, and can be an alternative to antibiotics. Let’s find out how it can improve gut health in poultry.

The ban on antibiotic growth promotors in the EU was the first step in the strategy to dealing with antibiotic use and the antibiotic resistance issue. At the same time, today’s high performing animal production systems challenge the health and well-being of the animal in general and the intestinal health in particular. Intestinal health comes up as a very popular term for one of the most important yet one of the most complex actions related to animal nutrition. A high status of intestinal health is based on a balanced microflora, an optimal intestinal tract and all interactions between both.

Organic acids have been used as an alternative for antibiotic use in feed for decades. Mainly short chain fatty acids have shown many desirable effects on gut health by enhancing cell growth and proliferation and intestinal barrier function, while reducing inflammation and oxidative stress. However, because of rapid absorption and metabolism, free unprotected SCFA generally showed a marginal effect in disease control. Alternative forms of butyrate, encapsulated or esterified are more desirable as the release of the active ingredient is programmed to be further down in the intestinal tract.

Besides many desirable effects that have been described for SCFA in literature, a new immune boosting function has been revealed. SCFA, butyrate in particular, have a strong capacity to enhance synthesis of endogenous antimicrobial host defense peptides, which are critical components of the animal’s innate immunity. Botanical components are commonly used as additional/synergistic active and antimicrobial feed additives. But the world of flora is much richer than only antimicrobial compounds. Strong anti-inflammatory components and anti-diarrhoeal extracts can be selected, which fit very well in the concept of antibiotic replacement.

In order to verify the efficacy of different sources of butyrate, whether or not in combination with botanical extracts, a research trial was set up in broilers. Different groups received different diets: Diet A was the control group. Second group received 1 g/kg powdered Sodium Butyrate (unprotected) (SB) (diet B), third group received 20 mg/kg Tylosin (diet C). Diet D was an antibiotic-free basal diet supplemented with or without 2 g/kg of a butyric acid*. Diet E was 1 g/kg of a a com­plex combining slow release and protection technologies**. Diet E was the control group.

The diets were fed for 21 days. It was shown that diets C, E and D all had a strong tendency to improve growth performance of broilers following three weeks of supplementation (Table 1). Compared to the control group, diet C and D significantly increased the BW, ADG, and FCR of chickens (P < 0.05) without affecting the ADFI over a period of three weeks. Overall, diet D and E were comparable to, if not better than, diet C. Chickens in diet group D had significantly higher BW and ADG in the first week than all other groups (P<0.05), whereas group c and e did not show an enhancement of bw and adg until the second week.></0.05),>

At the end of the third week, as compared to the control group, the BW of the group C, D and E increased significantly by 25.5%, 29.7%, and 25.6%, respectively. Because of largely no significant differences in ADFI among these four groups throughout the entire three weeks, the FCR in the group C, D and E reduced significantly by 28.9%, 25.4%, and 18.3%, respectively, relative to the control group. Such differences began to show up from the second week. Overall, the results clearly indicated that supplementation of 2 g/kg of the diet D and 1 g/kg of diet E strongly promoted animal growth performance with a similar efficiency to a commonly used feed antibiotic.

It is also worth mentioning that feed supplementation with 1 g/kg of diet B showed a numerical, but statistically insignificant increase (P>0.05) in the BW at the end of the second and third week, relative to the control group. However, because of a trend (P>0.05) in reducing the feed intake, the birds fed unprotected butyrate showed a significant improvement (P<0.05) in the fcr over the control group and were comparable to those of the other groups.></0.05)>

However, group B showed an obvious but insignificant reduction in BW and ADG as compared with the diet group D or E, both of which contain target released sodium butyrate, suggesting that butyrate microencapsulation or esterification enhances feed intake and growth performance of birds.
Consistent with the role of butyrate in barrier protection, diet A significantly increased the expression levels of several major tight junction proteins including claudin-1 (CLDN1) and TJ-protein-1 (TJP1 or ZO1) (P < 0.05) (Figure 1).  It is noted that unprotected butyrate lost its ability to induce CLDN1 and TJP1 gene expression, presumably due to its quick metabolism and degradation in the GI tract, reinforcing the positive effect of butyrate coating and protection. Diet D also had a tendency to increase the expression of mucin-2 (MUC2), the most abundant intestinal mucin protein present in the mucus. 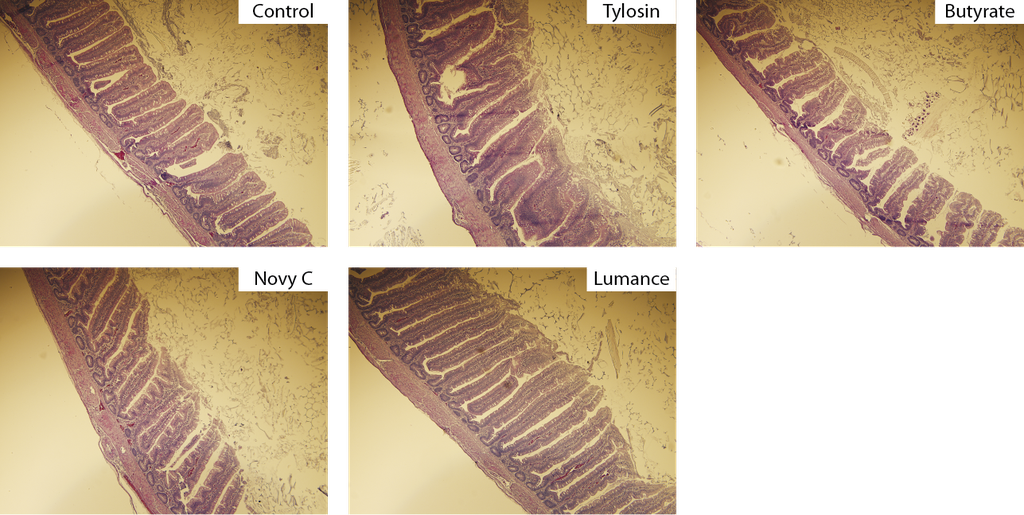 The effect of diets on the ileal morphology of chickens after three weeks of supplementation was further evaluated (Figure 2). Clear morphological improvements can be observed between the control and the different diets tested, of which diet E significantly enhanced the height of villi (P<0.001), relative to the control group. overall, diet d and e appear to be superior to unprotected sodium butyrate and are comparable to tylosin in promoting growth and productivity of broilers, and can therefore be used as effective alternatives to antibiotics.></0.001),>

Phytogenics reduce the need for antibiotics

Antibiotic-free swine production, is it possible?