Yeast products are known to benefit health and production of animals. The quest is now on the find a new generation of yeast fractions with optimised characteristics in terms of interaction with bacteria (pathogen binding) and modulation of the host immune system.

Yeast derivatives (inactivated whole yeasts or yeast cell walls) are well known for their benefits in animal and human nutrition and are mainly used to help balance the intestinal microflora and help stimulate the host’s natural defences. Most yeast derivatives on the market are by-products of the fermentation industry (for example, biofuel production), that is they are not primarily produced for this purpose. They are usually characterised according to their biochemical composition: level of mannan-oligosaccharides, yeast β-glucans or protein contents. If such an approach is interesting to evaluate product purity, it does not reflect their total functionality, for example their ability to bind to pathogens or stimulate immune pathways in the host.

Lallemand has invested to further delve into the relationship between composition and function of yeast derivatives with a view to select a new generation of yeast fractions with optimised characteristics in terms of interaction with bacteria (pathogen binding) and modulation of the host’s immune system. Cutting-edge techniques such as atomic-force microscopy (AFM) and single-molecule force spectroscopy (SMFS) were used to study yeast fractions. This made it possible to ‘visualise’ very precisely the yeast surface topography in terms of pathogen binding potential. It was shown that binding molecules were arranged differently depending on the yeast sample. For certain yeast strains, they are arranged as ‘sticky patches’. While in others, are scattered along the surface. In terms of functionality, the sticky patches show higher adhesive properties. This finding clearly shows that, while biochemical parameters are important, they are not sufficient to account for the functionality of a given yeast fraction. The distribution of these molecules along the cell wall is also very important. These studies demonstrate that all yeast strains do not share the same biophysical structure, or ‘ topography’. Using SMFS it was possible to measure the length of the polysaccharides chain: a characteristic linked to the binding capacity (the longer the polysaccharide chain, the better the binding potential). These findings also unveiled differences between yeast strains. Thus, yeast cell wall properties are linked to the strain, each strain exhibiting specific structure and functionality in terms of binding properties. Based on this knowledge, the single-molecule techniques were applied to screen different yeast strains and select the best candidates for optimal pathogen binding potential.

Importance of the production process

Another lesson learned from this research is that, for a given strain, binding properties can differ according to the production and inactivation process involved. Hence, for every selected strain, it is essential to determine the optimal production conditions: fermentation, but also the treatment of the live yeast to obtain the yeast fractions (inactivation technique). This cannot be controlled when yeast cell walls are the by-product of fermentation processes, since in this case the industrial processes are designed according to the primary production (e.g. priority to alcohol yield, etc.). When producing custom yeast cells, however, the production process for each strain can be adapted to reach the desired characteristics of the yeast derivative. Different stains from two different yeast species (Saccharomyces cerevisiae and Cyberlindnera jadinii) were selected for their complementary properties. For each strain, an optimal production process was developed. Once an optimal formulation has been designed based on in vitro studies, it was time to validate the model in vivo. A trial was performed to evaluate the aptitude of our new yeast derivatives product to mitigate pathogens presence in the intestinal tract of piglets. This study showed a significant reduction of E. coli contamination in faeces after a pathogen challenge (Figure 1). 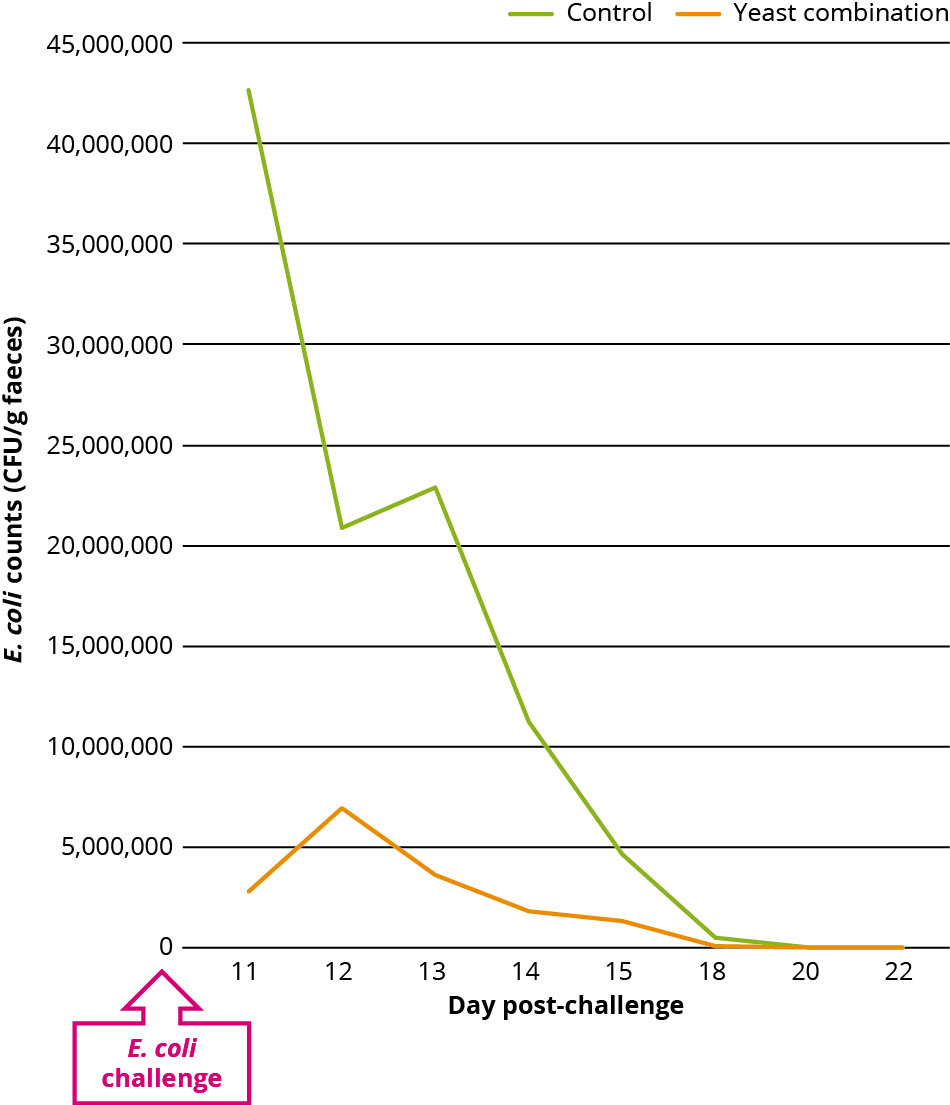 The selected yeast strains were also tested in vitro for their effects on the immune response. Certain parts of yeast cell walls are recognised by immune cells receptors. This interaction is known to stimulate immune reaction in the mucosa of the digestive tract. The most widely described and studied immune receptor is Dectin-1. Our study enabled us to evaluate, in vitro, the level of immune stimulation, using human immune cells (monocytes). Activation was measured as the production of reactive oxygen species (ROS) by these cells. The individual yeast strains selected as described above were tested in vitro. Yeast strains from the different species showed different levels of immune stimulation. Moreover, when mixed, the effects were not only additive but a synergistic effect was observed (Figure 2).

Trials in post-weaning piglets have shown benefits, particularly in the context of antimicrobial withdrawal in feed: improved faeces aspect, absence of diarrhoea despite challenging conditions (antibiotic and high dose zinc oxide withdrawal). Those benefits were reflected by an improved feed conversion ratio: 2.5% improved during the post-weaning period, up to 4.3% increase in the starter phase in absence of zinc oxide (commercial trial, Hungary, 2015). In young ruminants, commercial trials in calves, goats or lambs have also proven benefits on immunity and performance at time of digestive challenge, such as weaning. For example, kid goats, which are very sensitive to digestive problems and disease challenges at weaning, have shown higher body weight gain, especially in challenging conditions (diarrhoea): average daily gain was improved by 9% in mid-challenging conditions and up to 11.9% in high challenging conditions (high diarrhoea incidence) (commercial farm, France, 2015). In calves, similar trends were shown: a Spanish trial performed in a commercial farm (2014) showed that the yeast derivative supplementation helped improve average daily gain by about 50 g/day during the pre-weaning adaptation phase and around weaning. This is mainly explained by lower morbidity levels shown during this stressful period. The percentage of animals treated at least once with antibiotics is reduced by 39%, and animals treated for diarrhoea reduced by 70%. In addition to better growth performance, investigators measured a decrease of a biomarker of inflammation (haptaglobin). Users repeatedly notice improved pen homogeneity in those young animals. In conclusion, the use of an original, single-molecule microscopic-based approach to yeast strain selection and yeast derivatives development has led to a new generation of yeast derivatives, with promising applications at a time when increased pressure is put on the feed industry to reduce the use of antibiotics in feeds.

References are available on request.

Interest in Lysine decreases due to ASF concerns

Are yeast cell wall products the same from different sources?