What happens to the dairy cow during periods of heat stress, and what can be done to help her beat the heat? As it turns out, the most recent answer to this question contains an unexpected twist based on recent research that may change the way we view and manage heat-stressed cows.

At various times throughout the year, producers brace themselves for optimal animal management during times of environmental stress that can deteriorate animal production and welfare. Heat stress is of particular concern because it occurs annually in most geographical locations and causes major losses to the livestock industry (at least US$ 1.7 billion annually). Management interventions such as shade, fans, and sprinklers are often implemented but substantial decreases in performance are still observed. Although the physiology underlying heat stress and abatement methods have been studied for decades, producers continue to face serious challenges associated with climate change, combined with increased susceptibility of high performance animals.

Dairy cows gain heat from the environment when it is hot and humid and they also generate substantial heat internally during rumination and lactation. Heat is lost when the ambient temperature and humidity decrease, when milk is removed from the udder, and during elimination of faeces and urine. The earliest signs of heat stress include standing (attempt to dissipate heat from the body), panting, increased water intake, and decreased feed intake. Non-visible changes include rumen acidosis, decreased reproductive performance, and increased susceptibility to metabolic disease. Milk production is also decreased quickly with a timing that often coincides with a decrease in feed intake, so it has long been thought that the changed feeding behaviour causes the decrease in milk production. Decreased feed intake is a normal thermoregulation (survival) response by the dairy cow to prevent excessive heat production that occurs during digestion. Ration quality can be improved to help her get more out of her diet, but strategies aimed at improving feed intake would be counterproductive since rumination generates a lot of heat. If all of the lost milk is due to decreased feed intake, and reduced feed intake is a necessary survival response, is poor performance during heat stress a hopeless case of an unsolvable problem?

Scientists at Iowa State University performed a trial where cows were either exposed to heat stress or were in a comfortable environment but were fed to match the intakes of the heat-stressed cows. If intake was the sole cause of the decreased performance, the 2 groups would look similar. What they have repeatedly seen is reduction in feed intake accounts for only 35-50% of the decrease in milk production. The remainder of the response is due to other factors, which may be potential targets for optimising animal feeding and management during heat stress (Figure 1).What are these ‘other factors’? 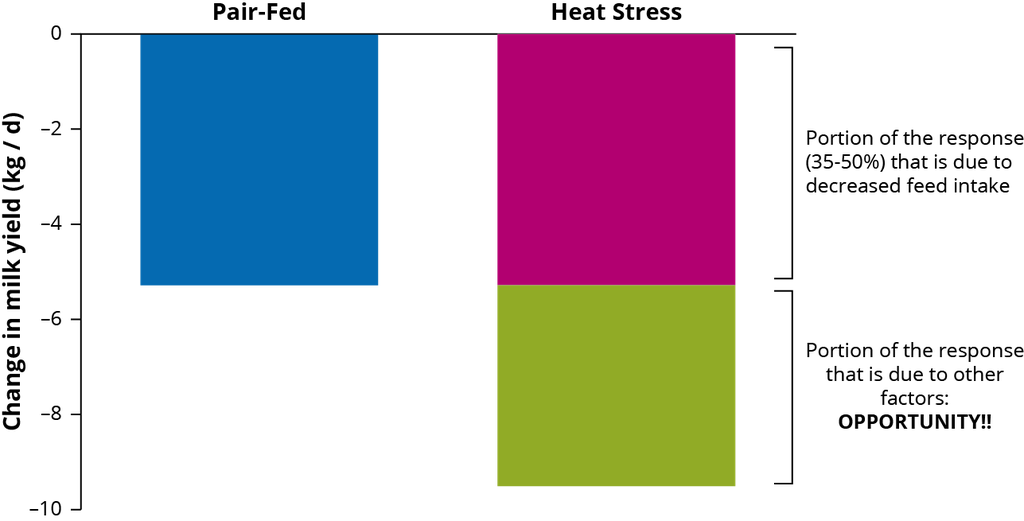 Heat-stressed dairy cows are known to go through shifts in nutrient partitioning including changes in fat, glucose, and protein metabolism. More fat is stored as adipose, skeletal muscle is broken down to supply additional protein, and the use of carbohydrates such as glucose is shifted away from milk production to support other functions (lost milk). The main hormone involved in these metabolic shifts appears to be insulin.

In fact, a surprising recent finding is that insulin seems to play a critical role in determining the susceptibility to and rates of survival heat stress. Therefore, feeding strategies that support or improve insulin activity in the lactating dairy cow may improve her ability to cope.

Another reaction to heat stress is a shift in blood flow from internal organs to the skin surface (again, a thermoregulation response), and this causes decrease in the health of the gut (a.k.a. ‘leaky gut’). This is especially important in dairy cows with rumen acidosis which also causes gut damage, so during heat stress their gut takes a double hit.

Recent findings on the performance of dairy cows during heat stress have shown that the reduction in feed intake plays a much smaller role than previously thought.
[Photo: Henk Riswick]

Why should we care about the gut health of a ruminant?

For one, although the rumen is critical for fermentation of feedstuffs, absorption of nutrients is impaired when gut health is sub-optimal. Second, some very new insights from the same scientists at Iowa State University suggest that leaky gut in dairy cows might actually be the cause of some classical metabolic diseases, including ketosis. Therefore, feeding approaches that can improve gut health may improve performance and with that decrease the risk of metabolic disease and minimise production losses during periods of heat stress.

Beating the heat with phytonutrients

Because both the rumen and lower gut need to work optimally in order maximise dairy cow performance, nutritional strategies to beat heat stress must target both organs. Recent studies evaluating various additives showed that a specific combination of phytomolecules consisting of capsicum oleoresin, cinnamaldehyde and eugenol (CCE*), does just that. First, supplementation with capsicum oleoresin improves feeding behaviour by increasing the frequency of feeding, without increasing total feed intake, resulting in a more consistently filled rumen. This stabilises heat production by the rumen and also reduces the occurrence of rumen lesions. Second, the combination of cinnamaldehyde and eugenol improves the breakdown of ingested feedstuffs, resulting in an enhanced volatile fatty acids profile and optimal protein metabolism. Moreover, this specific blend of phytonutrients acts in the lower gut to decrease inflammation and associated local generation of heat and thereby maintaining optimal gut structure and nutrient absorption. Taken together, the combined actions of the molecules in CCE exert effects on both the rumen and the lower gut to prevent any additional heat from being generated by dairy cows, while optimising digestion and nutrient absorption.

2 field trials conducted under conditions of heat stress in Israel confirmed these findings. Both trials were carried out in similar conditions to test the effect of CCE in the form of a feed additive, in alleviating heat stress in high producing Holstein dairy cows, from June to September. The natural environmental conditions created heat stress as measured by the temperature and humidity index (THI). During the trials, the animals were systematically divided into two comparable groups and were fed a high concentrate diet, in which the CCE was blended with ground corn meal and top-dressed. The effects of heat stress in the control group were observable. For example, in trial one, environmental conditions reduced milk production from 43.7 kg/d (low heat stress) to 39.4 kg/d (high heat stress). Feed supplemented with CCE caused significant improvements in milk production and feed efficiency under conditions of heat stress. Neither milk quality nor body condition score was negatively affected by the increase in milk production. Interestingly, somatic cell count reductions were also observed. Table 2 presents an overview, using results pooled from both trials with a total of 200 cows. Supplementation with CCE progressively increased milk production over time, resulting in an improved final milk persistency (Figure 2).

Figure 2 – Progression of milk production during the trial. 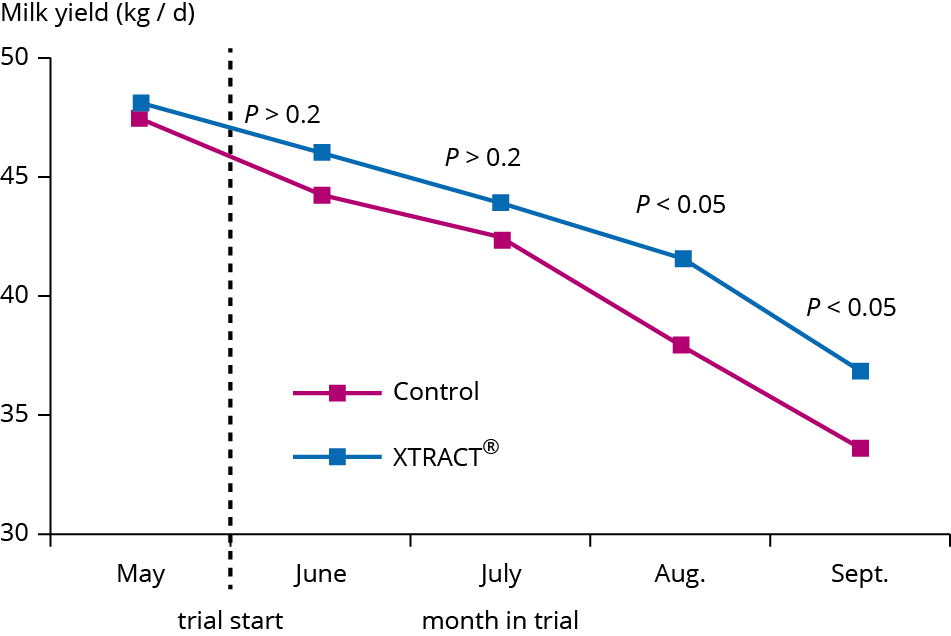 Recent findings on the performance of dairy cows during heat stress have shown that the reduction in feed intake plays a much smaller role than previously thought. Lower gut health is now known to be critical, representing new opportunities for refined animal management during periods of heat stress. Although feeding technologies currently available are limited, phytonutrients represent a promising natural solution to alleviate heat stress for producers.