Getting more out of feed additives

Feed additives have been found to have additional functions beyond their nutritional value for pigs and poultry. How they work exactly is still a topic of much research. This article zooms in on the mode of action of butyrate and botanical products.

One of the most important changes in livestock production over the past two decades has been the recognition of gut health as a key driver of animal performance. This phenomenon has been accelerated by an increasing awareness of the impact of good livestock management profitability and by the importance of disease prevention, as well as the search for a way to reduce the use of antibiotics.

It therefore comes as no surprise that many functional feed additives, i.e. components included in feed at low concentrations to trigger responses beyond their nutritional value, have been developed to specifically influence the outcome of these factors in a positive way. Additives that specifically support gut health include, among others, (salts of) organic acids, yeast and yeast cell wall products, botanical components, prebiotics and probiotics. As scientific knowledge of intestinal function and health continues to increase, recent scientific insights and methods are being used by feed additive researchers in an effort to optimise the efficacy of their products. In this article, two classes of functional feed additives are highlighted: butyrate products and botanicals.

Butyrate: Where to deliver in the GIT?

Sodium butyrate is a salt of the short-chain fatty acid butyric acid, which is the end product of the fermentation of carbohydrates by anaerobic bacteria in the hindgut. It is a molecule that is well known for its ability to elicit many effects at the cellular or microbiological level in several tissues. For example, it can be used as an energy source by the epithelial cells lining the intestinal tract and it is known to reduce the production of pro-inflammatory cytokines, to induce the production of enteric hormones and to strengthen cellular junctions between enterocytes, to name only a few responses. Several different cell types and bacteria that can be found along the entire GIT are responsive to butyrate. As to which part of this wide range of butyrate-dependent effects will be triggered will depend heavily on the enteric location where butyrate is delivered after oral ingestion. 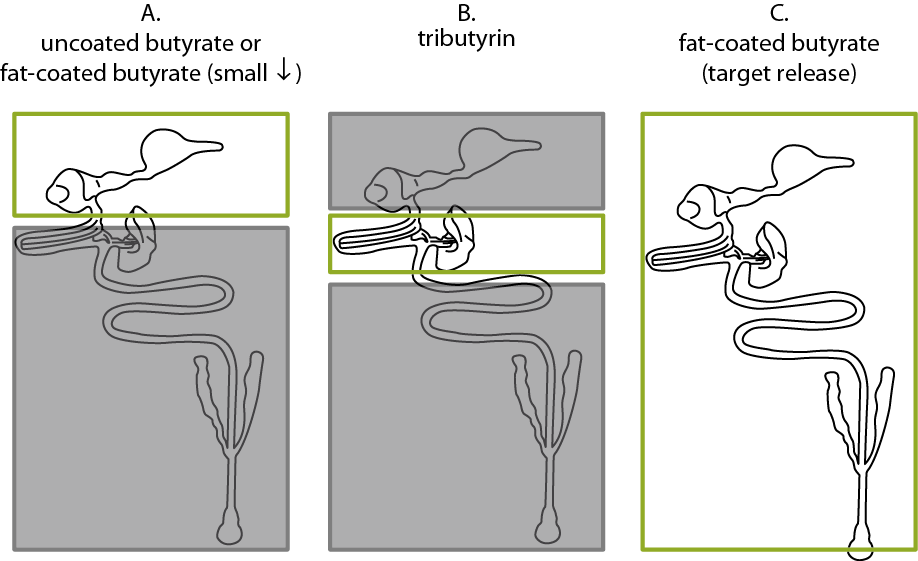 (A) butyrate products that are not coated or are only coated to reduce the odour of the product, (B) tributyrin and other butyrins and (C) products with a matrix that will protect part of the butyrate from gastric absorption and release butyrate gradually throughout the GIT.

For instance, butyrate, when unprotected, will be easily absorbed and metabolised in the first part of the digestive tract, the stomach. The part that is not readily metabolised by the gastric mucosa will be transported via the porta vena to the liver and subsequently to hepatic veins. Since animals will also benefit from butyrate delivered more directly to the intestinal mucosa (e.g. to bind the luminal receptors of entero endocrine cells, thereby stimulating the release of enteric hormones), feed additive producers have tried to create products in which butyrate is protected from gastric absorption.

To do so, they have typically relied on one of two approaches: the coating of butyrate and the use of butyrate derivatives such as butyrins. Coated products are typically composed of beads containing butyrate that is embedded in a protective matrix of vegetable fat. Products with only a small amount of fat (typically around 30%) offer no significant protection to the butyrate, although they will have a less pungent smell than uncoated butyrate. For products with a fat content of around 70%, a significant part of the butyrate content might only be released from the moment lipase is secreted in the duodenum, breaking down the protective lipid matrix, thereby resulting in a more gradual release of butyrate throughout the intestinal tract, which is often referred to as ‘target release’ or ‘slow release’. Mono, di and tributyrins, on the other hand, are composed of a glycerol backbone to which one, two or three butyrate units are bound, respectively.

It can be hypothesised that these molecules, as short-chain triglycerides, will not be absorbed in the stomach, but that the bonds on the outside end of glycerol will be cleaved off by pancreatic lipase, thereby releasing butyrate in the proximal part of the small intestine. These assumptions on butyrate release kinetics were tested in vitro and in vivo. In vitro evaluation is mostly done by incubation products in a solution that mimics gastric or intestinal environments. Gastric simulation is done at low pH and in the presence of pepsin, whereas intestinal incubation occurs at higher pH and in the presence of pancreatin or lipase.

The amount of butyrate that is set free from the product is then measured over time and is an approximation of the release profile of that product in vivo. Based on these in vitro assays, the GIT regions where butyrate is liberated from different types of butyrate products are summarised in . It was found that several fat (50-70%) coated butyrate (50-30%) products readily released their butyrate content as early as the gastric step, offering no target release protection at all. These profiles were subsequently validated in vivo by analysing the butyrate concentration of different parts of the GIT of animals that were fed those butyrate products.

Compared with butyrate, the study of botanical feed additives is even more complex, as these products are often composed of a mix of several components. Numerous phytochemicals, supplemented as dried herbs, plant extracts or essential oils, have been said to have favourable effects on a myriad of parameters, such as digestion, blood pressure, anti-inflammation and hepatic protection. It is therefore a challenge to rationally develop a botanical feed additive mixture: how does one select ingredients from a plethora of plant-derived components, each triggering several physiological responses, with the objective of supporting animal health and performance as much as possible? Several phytogenic feed additives that aim to support gut health and performance in livestock animals therefore try to target the composition and activity of the gut microbiota. 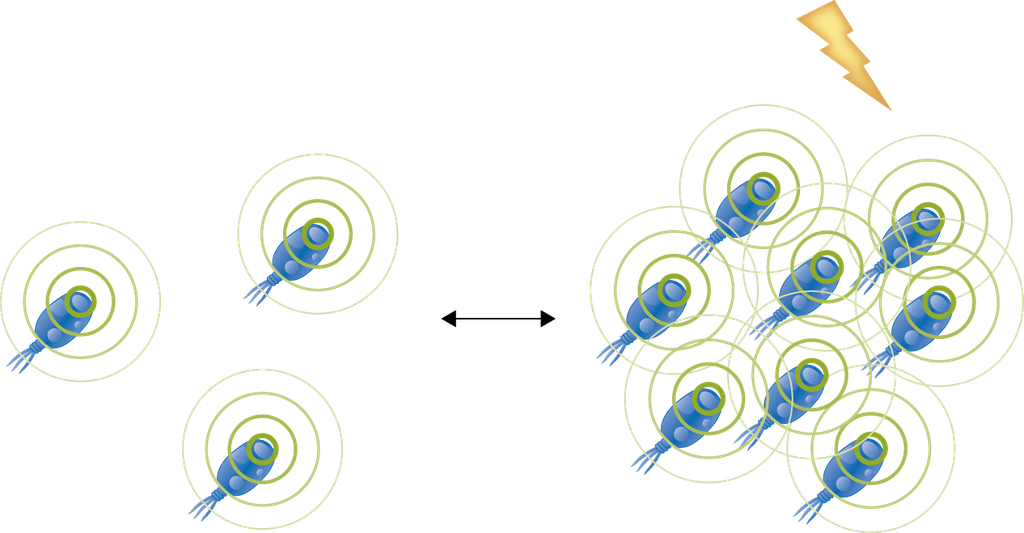 If the concentration of a bacterial species is low (as shown on the left), the QS signals will become rapidly diluted in the environment. On the contrary, if the number of bacteria increases (on the right), so will the concentration of QS signal molecules in the environment. If a certain threshold of these molecules is reached, QS signalling will become activated inside the bacteria (shown as a lightning bolt).

This can be explained by the fact that, in recent years, evidence has been accumulating for the pivotal role of the gut microbiota in maintaining the health status of several organs and tissues, including the GIT. When selecting ingredients affecting gut bacteria, such as botanical components, many feed additive producers rely on in vitro experiments that demonstrate their bacteriostatic effect. However, the active ingredients of these botanicals will end up in the digestive tract of production animals at concentrations far below the minimal concentration needed to inhibit the growth of (pathogenic) bacteria. It might be a more reliable approach to select feed additive ingredients by focusing on the effects that botanical components can have at much lower concentrations, and that are likely to be relevant for controlling bacterial activity and improving gut health. One of the potential mechanisms of botanical feed additives that can be placed in the picture is their effect on quorum sensing (QS). Bacteria continuously secrete QS signals, which allows them to synchronise their behaviour. More specifically, when the number (the quorum) of a certain bacterial species or group in an environment increases, so will the concentration of their secreted QS signals (Figure 2).

If a specific threshold of these molecules is reached, it will activate QS-dependent signalling pathways inside the bacteria, resulting in biochemical responses that are often associated with pathogenicity, such as the production of toxins.
As a consequence, compounds able to disrupt QS are being increasingly investigated in human medical research as potential alternatives to antibiotics due to their efficacy at low concentrations and the low chance of bacteria developing resistance against these non-lethal molecules. But QS has also been implicated to be of importance for veterinary and zoonotic pathogens, including Clostridium perfringens, Yersinia pseudotuberculosis, Campylobacter jejuni and Salmonella enterica subspecies enterica. Given that botanical feed additives have already been accepted in the agricultural sector as a means to enhance gut health and animal performance, screening phytogenic compounds for their capacity to inhibit QS will most likely be added to the toolbox of feed additive producers in order to develop products that are highly active at low concentrations.

Gut health is of vital importance to the well-being and performance of production animals. Several feed additives, such as butyrates and botanical products, have therefore been commercialised to support intestinal development and function. Recent insights into digestive physiology, microbiology and immunology have revealed some of the cell biological mechanisms that likely underlie their beneficial effects. Moreover, they have provided tools to assess the biological activity of these products in vitro. These assays can be used to justify the future development of these feed additives, thereby increasing the probability of their effectiveness in vivo.

Phytogenics reduce the need for antibiotics