Microbiome: Its effect on health and growth

The microbiome and its genetics are an underestimated influence on the animals’ health and growth performance. Feed and antibiotics are just a few that can trigger changes in the microbiome.

That genetics play such an important role for growth and survival traits is nothing new. But the genetic make-up of the microbiome and its impact on these traits have merely been viewed as an area of theory and research. Its impact might be underestimated and undervalued. Until recently, it was very hard to get detailed information from the microbiome. But since the prices of genome sequencing have dropped, there is more and more attention for the genetics of the microflora of the gut. Will that enable us to reveal the secrets of the microbiome in the future? There are numerous situations where the microbiome has a certain impact.

So there are a lot of questions that could be answered if we understood a little more about the basics of the microbiome. What influence do certain feed ingredients have? What is the impact of certain antibiotics on the microflora composition? What about prebiotics and probiotics? And what is the impact of feed transition on the bacterial populations? It is clear that the right bacteria together with the right feed substrates can have a positive influence on the animal’s wellbeing and in that way can positively affect its health and growth. Our knowledge about the microbiome is still rather limited, but the technology is available at an affordable price and recent research is sharing an interesting view on the potential of this field for the coming decades. It remains a complicated issue since we have to deal with the genetics of the host animal, the genetics of the microbiome as it develops in time, and environmental factors such as feed, disease and climate.

In fact, a pig is a composite of itself and its microbiome. The microbiome is the aggregate genome of all the microbes inside its body. It is estimated to have a 100 times more genes than the pig or human genome itself. The microbiome of a mature sow could contain between 10 and 100 trillion organisms. Every organ has its own specific microbiome (lungs, skin, intestinal tract, etc.). There are different species of microbiomes and within the species, there are genetic variations. The microbiome of the pig intestinal tract is dominated by two major groups: Firmicutes (±81%) and Bacteriodetes (±11%). However, the composition varies quite a bit from the beginning to the end of the tract. Some of the organisms are beneficial to the host animal, others have no known effect.

Only a small part is pathogenic, mostly under specific circumstances. The microbiome adapts its bacterial composition with changes in the living environment or substrates in the diets. A transition of feed or a very monotone feed composition will have its influence on the microbiome. After birth, the microbiome population goes through rapid development. During maturation of animals, the microbiome continuously adjusts itself to the environment. Diseases, vaccinations, climate, stress, seasons, local feed ingredients, all have their influence on the composition of the microbiome. The microbiome is in continuous symbiosis with its host. It contains pathogens and other bacteria that are perfectly in balance in a healthy animal. A disease can disrupt this balance and pathogenic bacteria can overcrowd organs and cause infections on the body. 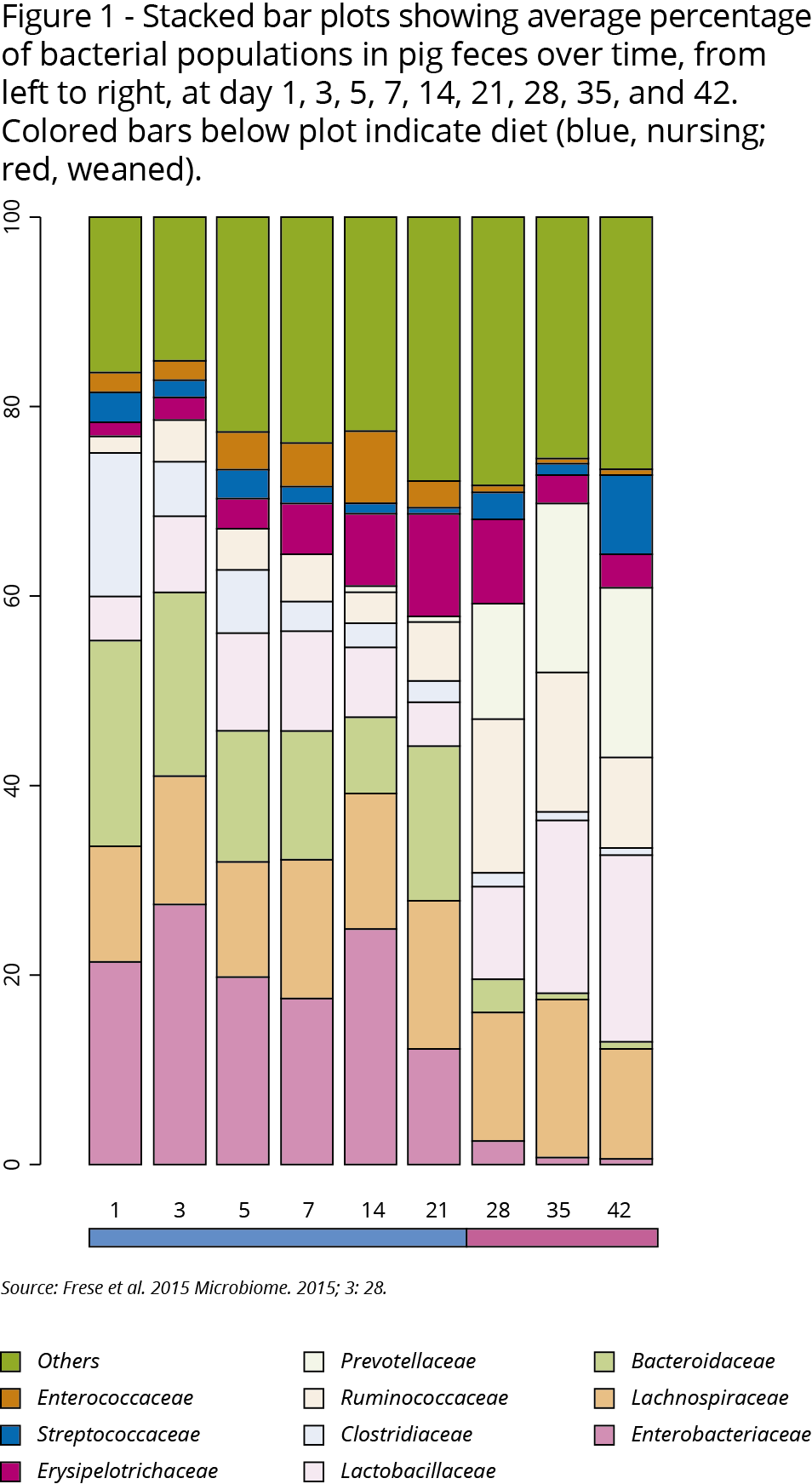 Transition in feeds and its influence on the microbiome

Weaning is one of the most abrupt changes of diets one can think of. During this phase the pig and its microbiome go through a drastic period of transition. During the nursing phase, the microbial population is rather stable. Before weaning the microbial flora appears to be milk-oriented. After weaning, populations of Lactobacillaceae, Ruminococcaceae, Veillonellaceae, and Prevotellaceae increase (Figure 1). The last for example is involved largely in plant polysaccharide consumption, a substrate that was not available in the milk-diet before weaning. Providing a change in substrate appears to be able to grow or reduce bacterial population with a factor 5 to 50 in a short time span of only a couple of weeks. One can imagine that every change in diet gets anticipated on by adjustments of the microbiome. In most cases a new balance is established fairly quickly. In some cases pathogenic bacteria get a chance to grow, immune barriers get disrupted and the host animal becomes sick. This makes it clear that abrupt switches in diets are not desirable. One should allow the animal and its microbiome a little time to adapt to new feed ingredients. Also the use of antibiotics has an influence on the microbial populations. It can both kill pathogenic and harmless bacteria. After a treatment in some cases, it might take nearly a year to re-establish a balanced microbiome. Other additives that can influence the microbiome are probiotics and prebiotics. Probiotics are live cultures of bacteria, considered to be “good bacteria”. Adding these to the diet can actively help to change the microbial populations. Prebiotics are non-digestible food ingredients that can be beneficial to the host animal by stimulating growth or activity of potentially positive microbial flora in the large intestine. Although all prebiotics are fibre, not all fibre is prebiotic.

A remarkable example of feed ingredients that influence microflora is the case of eubiotic Lignocellulose. Adding this compound to pig feed shows improvements of general health and provides an improved growth and feed efficiency. Also, the incidence of diarrhoea seems to be lowered significantly. Scientific studies in the last decade have confirmed this. The working mechanism is that the lignocellulose does not digest, but gets passed to the large intestine where bacteria help to ferment it. A different substrate in the large intestine brings a different microflora in that part of the gut. Studies showed that the amount of volatile fatty acids in the faecal samples was observed to be higher when they received a lignocellulose source like this (Figure 2). Also, the amount of butyric acid seemed to have increased with 20%. In other studies, done in 2015 by a team at Murdoch University in Australia, improved growth and gut health were confirmed again. Watching in detail to particular diseases lead to the conclusion that this source of lignocellulose appears to reduce the shedding of E. coli, but improved the growth of other bacteria such as the growth of Christensenellaceae, a bacteria belonging to the Firmicutes (Figure 3). The latter is known for producing butyric acid.

Research in broilers at the University of New England in Australia showed very similar results in 2015. In this study it could be proven, that this source of lignocellulose was beneficial to birds by increasing the concentration of lactic and butyric acid in the caeca.

Adding this mix of fermentable and non-fermentable fibre fractions, capsuled for protection to avoid release in the early digestive tract, to the pig diet appears to have a significant positive impact on growth and gut health. It seems to influence the total digestion and fermentation processes. It contributes to a different equilibrium especially in the large intestine of monogastric animals. Fermentation of dietary fibres by commensal bacteria in the gut leads in general to production of Small Chain Fatty Acids (SCFA). These SCFA, when produced in the hindgut, can be easily absorbed and can provide a significant contribution as an energy source to the host animal. Butyrate is one of the most important SCFA. It is beneficial in the large intestine for many reasons. It seems to play a role in satiety management and the maintenance of colonic homeostasis in broilers according to research done at the University of Ghent in Belgium. And butyrate seems to have a positive influence on epithelial cells, leading to a better epithelial cell proliferation and differentiation. Apart from a better water and nutrient absorption it leads to an improved barrier and pathogen control and seems to positively influence the immune system. On top of this, there is quite some emphasis that butyrate plays an important role in protecting against colon cancer. Several epidemiological studies support the role of butyrate against colon cancer. It seems to influence gene expression in cancer cells, which slows sown their development. Apart from butyrate this way of providing fibre also seems to stimulate the growth of Lactobacilli. They produce lactic acid which can be fermented as well to butyrate by the earlier mentioned group of bacteria named Firmicutes.

Also feeding fibre to pregnant sows at the end of their lactation period shows a positive impact on a couple of traits. First fibre-rich diets continuously stimulate the intestinal tract and by this, they have a positive influence on duration of partus. A shorter duration of partus increases piglet survival rates. In a Dutch trial partus duration decreased from 220 minutes (no treatment) to 180 minutes (Opticell®), which is a reduction of nearly 20% . Also birth weights and litter weights at weaning appeared to be significantly increased by 5.2% and 12.2%. A potential explanation is that the fibre fermentation in the hindgut of the pregnant sow leads to a higher energy absorption, which seems to be easily transferred into higher piglet weight. It appears to be a repeatable fact that with continuously increasing litter sizes hands a nice tool to pig producers to improve piglet quality and health. 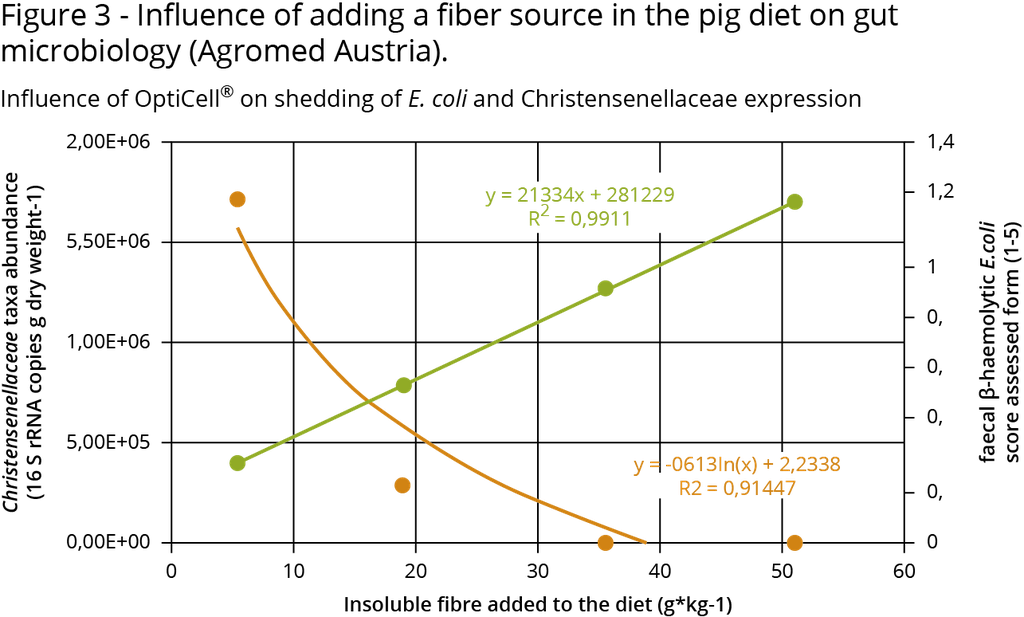 The right time and place

The hindgut in monogastric animals is poorly developed early in life. The more mature the animal becomes the easier it can benefit naturally from various fibre sources. Rough fibre sources have been part of a pig’s diet and evolution has helped them to be able to survive and benefit from these diet ingredients. Younger pigs have a lower natural ability to benefit from these resources. Ensuring that ingredients are available in the right part of the large intestine is important in order to have full benefit from them. A lot of probiotic feed ingredients will probably get digested earlier on in the digestive tract and will never arrive in the large intestine to provide its full beneficial impact. A natural product can, with a little help of modern technology, be extremely beneficial for animals, not only monogastrics. Although only part of the working mechanism is understood, adding fibre sources to diets seems to be commonly accepted having positive influences on animal’s performances that can be easily exploited. Fibre sources are ingredients that fit in modern pig diets.

A new class of feed probiotics is under development in Russia