Growth performance of livestock depends on various factors, including dietary trace elements. For example, copper (Cu) belongs to the essential nutrients for monogastrics and deficiencies can cause behavioural and physical problems.

Copper is involved in the activity of numerous enzymes. Requirements are relatively low for livestock: 4-10 ppm for pigs, 4-5 ppm for laying hens and approximately 8 ppm for broilers, according to scientific organisations (NRC, INRA). Nevertheless, copper is generally added at higher dosages in animal diets. In the EU, the maximum authorised level is currently 170 ppm in piglet diets, and in non-European countries, copper is sometimes added up to 150 mg/kg in broiler feeds. When copper is used at very high dosages during a long period, negative effects can be observed in the field and absorption rate of copper in the small intestine decreases, meaning that the homeostatic regulation is saturated.

This homeostatic regulation is partially based on the specific transporters and the control of their expression (Figure 1). Copper shares its transporters with some other trace minerals. For example, the main copper transporter in enterocytes, CTR1, is also related to iron (Fe) absorption. CTR1 was discovered in 1994, in yeast, and then studied in mammals and in zebrafish. Copper absorption depends on its oxidation state. Uptake of copper by CTR1 is possible only with the monovalent form of the copper ion, i.e. the cuprous form Cu+. However, almost all the copper sources authorised in animal nutrition include copper ions in the divalent form, i.e. the cupric form Cu2+. Consequently, some membrane proteins are needed to reduce Cu2+ into Cu+; currently, these proteins are not fully identified, but the main hypothesis refers to Steap proteins, like Steap2, identified like Fe3+ reductase. In case of excess of copper, no effect was observed on the gene expression and on the protein expression of CTR1, but the number of CTR1 located on the apical membrane would decrease (by endocytose). 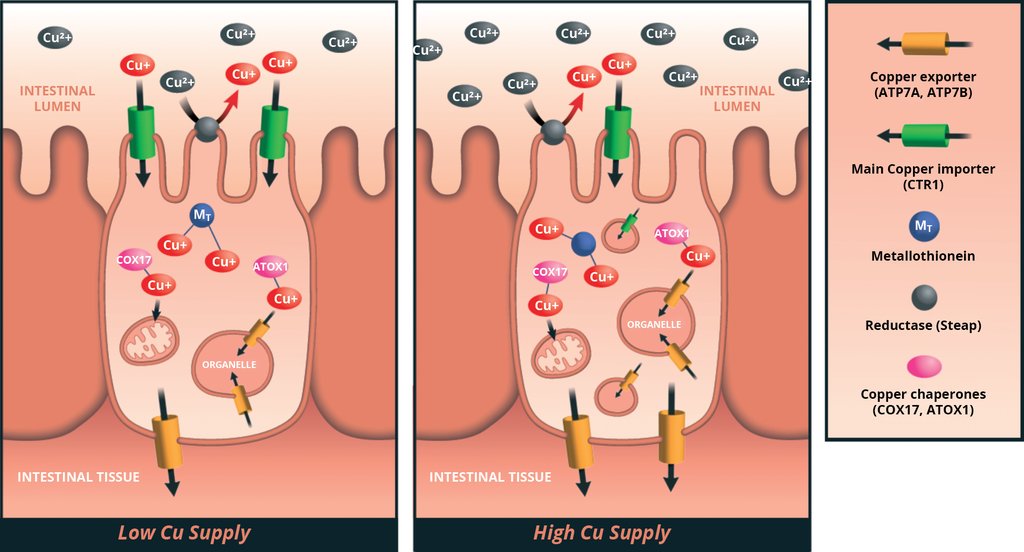 Concerning the other copper transporters, a transporter named CTR2 could also be involved. Nevertheless, according to in vitro studies, affinity of CTR2 for copper would be 20-fold reduced compared to CTR1. In addition, the primary iron importer DMT1 (divalent metal transporter 1) could also transport copper, as well as other divalent metals like manganese or cobalt. While CTR1, CTR2 and DMT1 are supposed to increase the intracellular copper concentration, ATP7 proteins are required to decrease it. ATP7A, also called Menkes protein, is located in the membrane of vesicles, in numerous tissues. Another copper transporter, ATP7B, also known as Wilson disease protein, could be essentially found in specific organs (brain, liver, kidney, placenta…). Exposure to a high level of copper, ATP7A would move to a basolateral localisation.

In addition, some copper chaperones have been discovered since the 2000’s. These proteins safeguard the cells from toxicity problems induced by free metal ions, by binding intracellular Cu+. They are associated with intracellular transporters or specific enzymes: for example, ATOX1 with ATP7A and ATP7B or CCS with the enzyme SOD (superoxide dismutase); COX17 is essential to transport copper ions into mitochondria and into cytochrome c oxidase. Last but not least, metallothionein are able to bind copper and consequently decrease the intracellular concentration of free copper ions. They can also be associated with zinc.

Copper absorption in the presence of zinc

It has been observed that zinc in excess could inhibit the intestinal absorption, the storage in liver and the placental transfer of copper, which could induce clinical and biochemical signs of copper deficiency. Zinc induces transcription of metallothionein (MT), which can bind several trace elements, including copper. In addition, as the stability of the complex Zn-MT is 100,000 times smaller than the stability of the complex Cu-MT, high dosages of zinc could lead to saturation of intestinal metallothionein, with a great amount of Cu-MT complex which can be released into the intestinal lumen. Nevertheless, this hypothesis is called into question in some studies. A competition between zinc and copper would occur at the brush border of the enterocytes, with a down-regulation of the copper-transporter induced by zinc.

As only the copper ion Cu+ is absorbed by the main copper transport CTR1, further research is needed to determine the oxidation state of dietary copper sources in the gastro-intestinal tract.