Different biomarkers for zearalenone (ZEN) and fumonisins were used to demonstrate the in vivo efficacy of 2 enzyme reparations for degradation of ZEN and fumonisins and the inability of 2 lignocellulose binders to adsorb ZEN in the GI tract of pigs.

The primary aim of mixing feed additives for mycotoxin inactivation into feed is to reduce the bioavailability of the mycotoxin. This goal can be achieved either by irreversible adsorption to a mycotoxin binder or by enzymatic or microbial inactivation. The most straightforward approaches to assess the efficacy of both types of feed additives are to monitor changes in biomarkers of effects (which are, however, only available for some mycotoxins) or to compare the molar sum concentrations of the absorbed parent mycotoxin and its natural metabolites in the positive control- and in the treatment groups. For pigs, the 2 possible matrices for determining the sum concentrations of absorbed compounds are urine and serum. Due to different water content of urine samples, normalisation of sum concentrations to creatinine, a biological marker compound excreted at relatively constant rate, is crucial for reliable comparison.

Whereas investigation of the suitability of binding agents relies on the reduction of the bioavailable parent mycotoxin, the products of enzymatic or microbial degradation serve as additional biomarkers for testing the suitability of feed additives based on enzymatic or microbial conversion in the GI tract of the animal. Degradation of mycotoxins which are either poorly absorbed or partly transported back to the GI tract by biliary excretion can also be assessed by evaluating the mycotoxin metabolite pattern in faeces. Table 1 provides an overview of possible biomarkers for determining the efficacy of binding agents, enzymes and microbes to inactivate ZEN and fumonisins in the GI tract of pigs.

ZEN is readily absorbed from the GI tract of pigs and in part reduced to α-zearalenol (α-ZEL). Both ZEN and α-ZEL are glucuronidated to a large extent and excreted via urine. The biomarker of choice for testing the efficacy of feed additives is therefore the molar sum concentration of ZEN metabolites in urine, obtained either by direct analysis of the glucuronides or after hydrolysis with β-glucuronidase. Unlike ZEN, fumonisins are poorly absorbed from the GI tract of pigs, resulting in highest fumonisin concentrations in faeces and low concentrations in blood and urine. Hence, the fumonisin pattern in faeces is the most easily determinable biomarker of exposure. However, it does not exactly reflect the fumonisin pattern at the time point of absorption, as further conversion of non-absorbed fumonisins might take place prior to their elimination via faeces. In addition, determination of fumonisin concentrations in faeces is not applicable for investigating the efficacy of fumonisin binding agents. However, compared with ZEN, in vivo studies with fumonisins are simplified by the existence of a biomarker of effect: Exposure to fumonisins causes disruption of the sphingolipid metabolism, resulting in an altered ratio of the sphingoid bases sphinganine (Sa) to  sphinganine (So) in blood. Yet, the elevation of the Sa/So ratio is dependent on the fumonisin concentration and on the  duration of exposure. Therefore, usually a combination of  the fumonisin pattern in faeces as biomarker of exposure and the Sa/So ratio as a biomarker of effect is used to evaluate the efficacy of fumonisin inactivating feed additives.

Reliable investigation of the in vivo efficacy of mycotoxin deactivators requires well designed animal trials, including a negative control group fed basal diet, a positive control group exposed to diet contaminated with the mycotoxin of interest and one or more treatment groups receiving the contaminated diet plus feed additive. In addition, the number of animals per group needs to be sufficiently high to account for inter-individual differences in the metabolisation and degradation of the parent mycotoxins in the animals.

An example for using biomarkers to investigate the enzymatic degradation of ZEN is assessment of the in vivo efficacy of a lactone hydrolase capable of converting ZEN to hydrolysed ZEN (HZEN) in vitro (see Figure 1). Pigs received either diet contaminated with 500 µg/kg ZEN (positive control) or the same diet mixed with lactone hydrolase for four days and urine as well as faeces samples were collected. Absence of ZEN- and ZEN-glucuronide coupled with appearance of HZEN, decarboxylated HZEN (the product of spontaneous decarboxylation of HZEN) and their glucuronide metabolites in urine of the treatment group proved the hydrolase’s ability to cleave ZEN to HZEN in the GI tract of pigs. Analysis of faeces samples revealed traces of ZEN in faeces of some pigs of the treatment group and absence of all glucuronidated forms, but otherwise confirmed the results of urine analysis.

Another animal experiment with pigs was carried out to assess the in vivo efficacy of two lignocellulose binders which had previously shown in vitro adsorption values of ≥ 90%. Molar sum concentrations of ZEN metabolites in urine were used as biomarkers. Due to a low dietary ZEN concentration of 150 µg/kg, ZEN-glucuronide was the only metabolite above the limit of quantification in urine. Normalisation to creatinine yielded no significant differences in urinary ZEN-glucuronide concentrations in the ZEN positive control group and in the two treatment groups fed with diet containing lignocellulose binder, showing that the lignocellulose binders failed to prevent ZEN resorption in our experiment.

Figure 1 – Enzymatic degradation of ZEN and fumonisin B1. 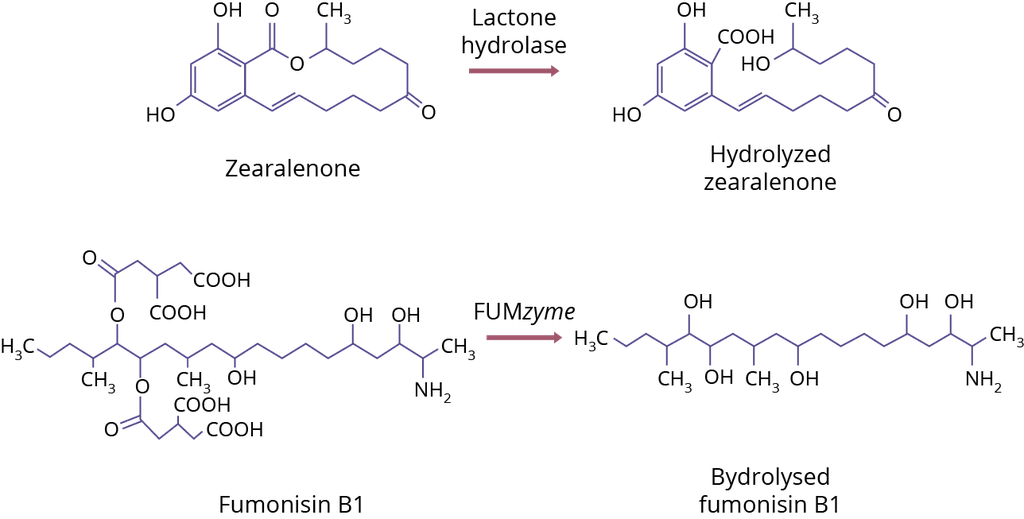 Trials to determine the efficacy of a fumonisin esterase

Finally, 2 pig experiments were carried out to investigate the efficacy and the optimum dose of FUMzyme (hereafter named the feed additive), a carboxylesterase designed to cleave FB1 to its much less toxic hydrolysed derivative HFB1 (Figure 1).  In the first pig experiment, six pigs per group received feed  containing FB1+FB2 at the guidance level of 5+1 mg/kg  (positive control, PC), the same feed plus the feed additive (treatment group) or uncontaminated basal diet (negative control) for five weeks. As only plasma samples were taken, solely the Sa/So ratio was studied. After three weeks of continuous exposure, the Sa/So ratio was significantly elevated in the PC group. At the end of the trial, the average Sa/So ratio was further increased from originally 0.12 to 0.85 in the fumonisin PC group, but remained unchanged in the negative control and in the group which had received the feed additive.