In this article we focus on the mycotoxin contamination of common swine diet ingredients. The results are based on the 2016 edition of the Biomin Mycotoxin Survey.

From the data, we saw a quite high incidence of mycotoxins, coupled with high average values in some commodities.

77% of all corn (maize) samples worldwide tested for deoxynivalenol (DON) in 2016, making it the most prevalent mycotoxin for any ingredient surveyed. The worldwide average concentration of DON was 1595 parts per billion (ppb). Levels of DON above 900 ppb are considered high risk for piglets and values above 1000 ppb are considered high risk for all kinds of pigs (sows, growers and finishers). The 2nd most prevalent mycotoxin in 2016 was fumonisin (FUM), detected in 73% of corn samples worldwide.

The average concentration of fumonisins was 2,017 ppb, a value far above the high risk threshold of 1,500 ppb for swine. Zearalenone (ZEN) was detected in 50% of corn samples at an average concentration of 334 ppb, a value considered high risk for pigs. Aflatoxin (Afla), T-2 toxin and Ochratoxin A (OTA) were detected in 14%, 13% and 8% of corn samples worldwide, respectively. The average values of Afla and T-2 were 39 ppb and 69 ppb respectively, values that are considered medium risk to pigs.

As for the other commodities, in wheat DON was the most prevalent mycotoxin worldwide in 2016 and was detected in 46% of samples. At an average concentration of 960 ppb this mycotoxin poses a high risk for swine. ZEN was the second most prevalent mycotoxin in wheat samples worldwide with an incidence of 37%. The average concentration of 98 ppb poses a medium risk to pigs. T-2, Afla, FUM and OTA were detected in 22%, 16%, 14% and 12% of samples.

Keep up to date: Find out here all you need to know about mycotoxins, regulations for mycotoxins and much more!

DON was the most prevalent mycotoxin in soybean samples worldwide with an incidence of 48%. The average concentration of this mycotoxin was 312 ppb, posing a medium risk to sows, boars and piglets. FUM and ZEN were both detected in 38% of samples. The average concentration of ZEN was 48 ppb a value that represents a medium risk for piglets. Afla, T-2 and OTA were detected in 24%, 20% and 15% of samples, respectively.

The negative effects of mycotoxins on pigs 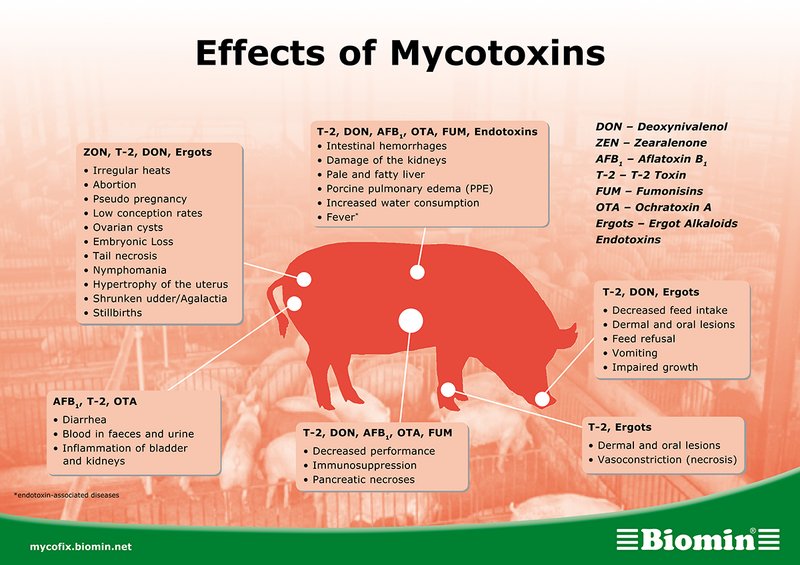 Swine feed is composed by a broad variety of ingredients, with the ones showed in this article being the most representative ones. However, the risk evaluation does not take into account the synergistic and additive interactions of mycotoxins, (FUM and DON are of particular relevance in swine), that contribute to increase the risk exponentially.

Other factors that should be taken in account are the effects of subclinical doses (also known as low dose exposure), that are of particular concern in ruminants and swine due to the longer life span of the animals and the presence of other pathogenic entities on the farm. In fact, even at low doses mycotoxins can affect nutrient digestibility and the immune system, resulting in economic losses. All these factors taken together, suggest that the most efficient way to counteract mycotoxins is the use of a registered deactivator that together with covering a broad spectrum of metabolites, also boosts the immune, liver and gastrointestinal functions at the same time.