Gut health of piglets can be supported in several ways. By influencing the immune response in the gastrointestinal tract it is possible to indirectly stimulate piglet growth. Another way to support piglet health is by supporting their mothers.

Today, the antibacterial and antiviral properties of alpha-monoglycerides have well been described in literature as well as their beneficial effect on animal health and performance. Alpha-monoglycerides are a class of glycerides that are composed of a fatty acid linked to the first position of a glycerol molecule, see Figure 1. 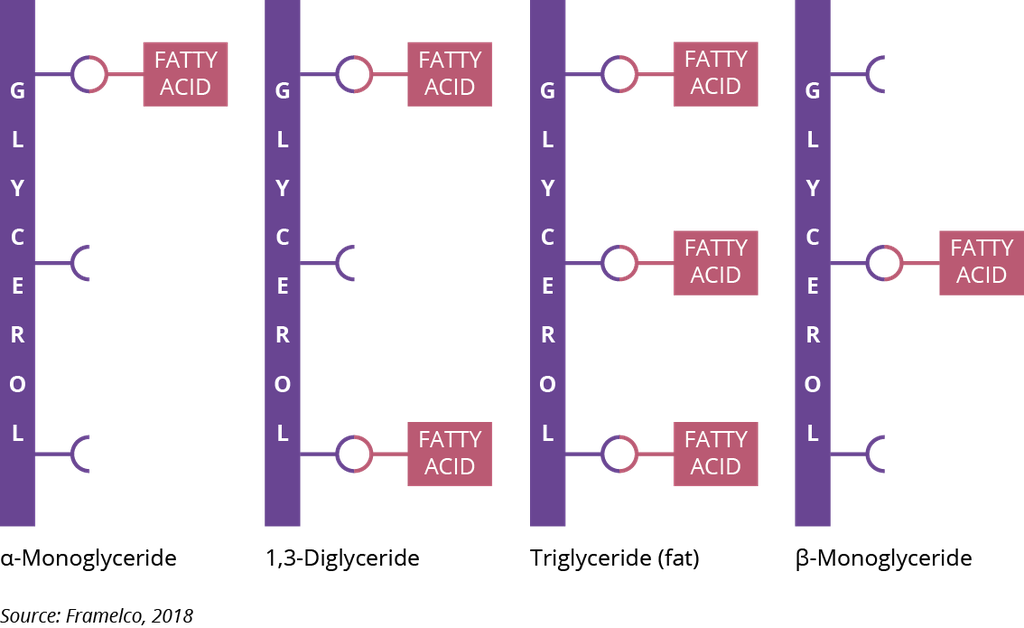 It is precisely the ester bond at this position that gives them their strong antibacterial properties. In addition, alpha-monoglycerides show much stronger antibacterial effects than their corresponding free fatty acids (e.g. alpha-monopropionin compared to propionic acid). Organic acids need to be undissociated to perform their disturbing effects on pathogenic cells. Because of their specific molecular structure, alpha- monoglycerides are pH independent and consequently do not dissociate at pH values found in the gastrointestinal tract of pigs and poultry. This is in contrast to the more conventional organic acids, like formic acid and propionic acid.

Alpha-monoglycerides of short chain fatty acids are known to be more active against gram-negative bacteria, whereas alpha-monoglycerides of medium chain fatty acids are more active against gram-positive bacteria. Combining them could help balance the composition and functioning of the microflora in the entire gut, called eubiosis. The state of eubiosis in the gastrointestinal tract strongly influences the immune system of animals and as a consequence performance level. Despite the known power of alpha-monoglycerides, new insights about the exact working mechanisms are still being gained.

Going for the full growth potential

As much as 70% of the immune cells are located in the gastrointestinal tract, making it the largest immune organ of the body. This immunity plays an important role in fighting pathogenic bacteria, viruses and more. However, even mild immune challenges will activate inflammation processes and will result in a negative impact on feed intake and maintenance requirements, with impaired growth and feed efficiency as a consequence. If we are able to better control these inflammation processes, we will be able to retain more nutrients for growth.

In cooperation with KU Leuven in Belgium, it was tested whether alpha-monolaurin (alpha-monoglyceride of C12) and a combination of alpha-monocaprylin (C8) and alpha-monocaprin (C10) possess anti-inflammatory properties. A specially designed in vitro model was used, in which macrophage-like cells are challenged with lipopolysaccharides (LPS). When challenged, these immune cells will produce nitrogen oxide (NO). Feed compounds that are able to reduce the NO production of the macrophage-like cells are expected to have anti-inflammatory properties in vivo.

The inhibitory concentration 50 (IC50) indicates from which dose level onwards an anti-inflammatory effect is observed. Oxytetracycline (OTC), the control group, showed an IC50 of 400 ppm, which was expected based on the working mechanism of this antibiotic. In this experiment, both alpha- monolaurin and the combination of alpha-monocaprylin and alpha-monocaprin resulted in a clear reduction of the NO production with an IC50 comparable with OTC (200 ppm and 800 ppm respectively, see Figure 2). Based on these results it can be expected that alpha-monolaurin, alpha-monocaprylin and alpha-monocaprin do have the potential to reduce the negative impact of pro-inflammatory processes on growth performance. With this new insight young animals can be brought one step closer to expressing their full genetic growth potential.

on nitrogen oxide (NO) production by LPS challenged macrophage-like cells.

It all starts with the sow

One of the first things in life that a new-born piglet comes into contact with are the faeces of the sow. The transmission of a balanced microflora from the sow to the piglets via faeces is an important factor for a successful microbial colonisation and optimal gut health of the piglets. If we are able to support gut health in sows towards a more balanced microflora, we are able to provide a first survival package to the piglets.

FRA Gut Balance Dry contains alpha-monoglycerides of both short chain and medium chain fatty acids and is the key to overcome bacterial challenges from both gram-negative and gram-positive bacteria. A trial was conducted with sows and piglets under practical circumstances to demonstrate the effect of the solution.

In the first phase of the trial, sows in the treatment group received 2kg of FRA Gut Balance Dry per ton of feed from 7 days before farrowing until weaning at 4 weeks. The mortality within the first 24 hours after birth was reduced with 45% when the alpha-monoglycerides were added to the sow diet. In addition, the average daily weight gain of the suckling piglets was 20% higher compared to the control group, resulting in a significantly higher weaning weight (7.0 vs 5.9kg). This indicates that piglets from sows receiving the supplement in the lactation feed do have a better immune status and consequently are less prone to become infected and therefore show a better growth performance.

In the second phase of the trial, piglets from the sows which received the supplement were also administered it in their piglet feeds. These piglets continued to perform clearly better in terms of feed intake and growth, which resulted in an end weight of 25.8kg compared to 23.7kg in the control group. This will result in a higher profitability, but also in a shorter fattening period. From this trial, it can be concluded that adding FRA Gut Balance Dry to the lactation feed results in a better start for the piglets, resulting in lower mortality and considerably higher weaning weights. The solution may also be beneficial for piglets after weaning, as they showed a better growth performance.

Despite their proven antibacterial and antiviral effects, there is still much to discover about alpha-monoglycerides. Recent experiments have shown that their effects are more extensive than we thought so far. Promising in vitro results indicate that the beneficial effects of alpha-monoglycerides on animal performance not only result from antibacterial effects but also from their anti-inflammatory properties.